all together in one happy place

Last week my sister-in-law said something that reminded me what kindred spirits we are.

She and my husband's brother Joe spent the week with us at the coast and then stayed Friday night at The Rice Ranch before returning home to San Diego. They've been in the ministry as long as we have, they got married six weeks before we did, and our first babies were born just two months before our first anniversaries. The rest of their children are all roughly our children's ages ... with the exception of our last seven. For years I've tried to persuade Heather to join me in continuing to add to our family (and later doing so while grandbabies were added in), but she has always polity declined. Other than this difference, we have always been, as I said, kindred spirits.

It's been a few years since Joe and Heather visited us, so this was their first time seeing The New Rice Ranch. They've visited The Previous Rice Ranches many times, but we have not yet had the privilege of hosting them in our current home. After giving them a brief tour (which was a huge deal for me, given that our house does not usually merit a tour upon returning home from vacation - who knows what odors or dust bunnies or dirty underwear lie waiting for unsuspecting visitors to observe) Heather made this statement : "I'm so glad we got to see your house- now I know where to picture you whenever we talk !" I have felt the identical sentiment every time I visit a friend's house I've never seen before... in fact I think I said the exact same thing to one of my friends last month when they had us to their new home for the first time.

I'm a visual-thinker (if there is such a phrase), and having a mental image of someone in a particular place while we are texting or talking on the phone helps give context and flavor to our conversations. I can't avoid this brain-quirk- it's just something I do automatically, and I've done it ever since I can remember.

I do the same thing when hearing sermon illustrations - I can't just hear an event told, I have to imagine the setting, etc. in my mind and pull up a mental image of what I assume everyone looks like. I don't just hear the story of the young child being reunited with her family after bravely escaping her kidnappers, I see her running to embrace them, tears streaming down her parents' faces while a crowd of onlookers cheers wildly behind them. I can picture her disheveled hair, the look of relief on her mother's face, the flash of the cameras as reporters capture the happy moment. The downside of this, is that I can't just hear a story about someone cutting their own finger off to extract themselves from the boulder that landed on them while they were mountain climbing (or whatever that sermon illustration was), I have to envision the gruesome scene for myself, blood spurting and all.

Anyhoot- I totally knew what Heather was talking about when she said she was glad she knew where to picture me in future phone conversations :)

Sooo.... this little photo is for all my fellow visual thinkers out there ... 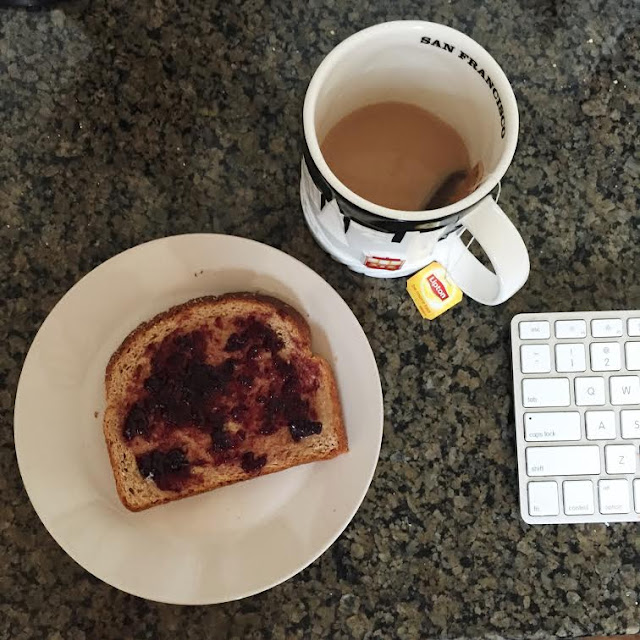 ..... try to picture me in cute jeans and a maternity shirt with some makeup on and my hair done nicely, okay ? Because I would never be sitting at the computer in gray striped pajama pants and a day-old t-shirt with an extreme case of bed head at ten-thirty on a Wednesday morning. No way, Jose. You just never know when your always-put-together neighbor might ring the doorbell with a stack of information on how to prepare for the upcoming earthquake/tsunami that's going to wipe the entire Pacific Northwest off the map .... (Which may or may not have happened at ten thirty yesterday morning when I was attired in a similar outfit, sporting Tuesday's version of the bedhead look. When will I grow up ??? I wanted to say, "Lady, I'm just trying to figure out how to get a shower before lunch, forget preparing for a natural disaster !")

Oh yes, I was fully clothed and presentable and typing at my computer while sipping my morning tea and munching on toast with Northwest Blackberry jam. Please adjust your mental image accordingly. Thank you.

So last week, as I said earlier, we went on vacation with Sam's brother and his wife and several of their children and grandchildren. We were also joined by his sister and her husband and children, and Josiah and Monique and Macie were able to come as well. Two years ago we all rented the same house that Sam's mom grew up in - it is a sprawling ranch style home right next to the beach, and Sam's uncle and aunt live just a few minutes away . Uncle Henry and his lovely wife joined us each evening for dinner, while he shared many memories of his childhood playing in the very rooms we were staying in. Last week we did the same, and it is a tradition we plan on continuing for years to come. At least until that earthquake/tsunami wipes us all out, at which point we will resume our family reunion in Heaven. (and hopefully I won't have to do the dishes there.)


It was such a nice, relaxing week... my sisters-in-law and I each took turns preparing dinner for everyone, and we shared breakfast and lunch preparations, as well as the dishes - many hands make light work ! The children all got along so well, playing in the giant playroom or at the beach, or watching the teenagers during their countless volleyball games on the front lawn. The weather was perfect- not too chilly and not too warm, and everything just seemed nicer with a houseful of loved ones to share meals and chores with.

And at this point I would like to say that you know God is real when 24 people can live under one roof for the week enjoyably, without any family feuds. We say it all the time, but it is purely the grace of God that Sam and his siblings and their spouses and children are clothed and in their right minds and serving the Lord... if you knew their childhood, and the disfunction and disharmony they experienced, you would know the magnitude of that statement. Only Jesus could take what was once broken and ugly and turn it into something truly beautiful and healed. 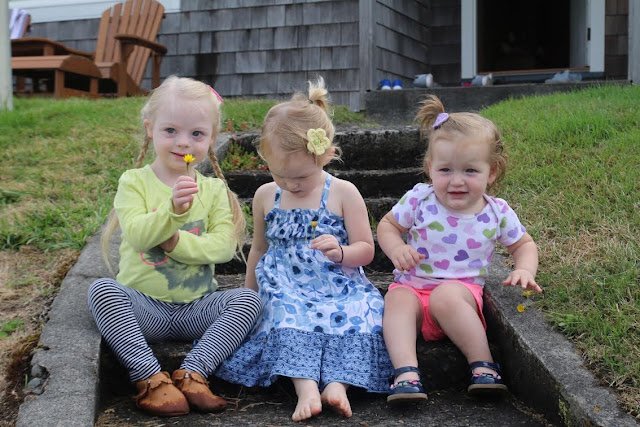 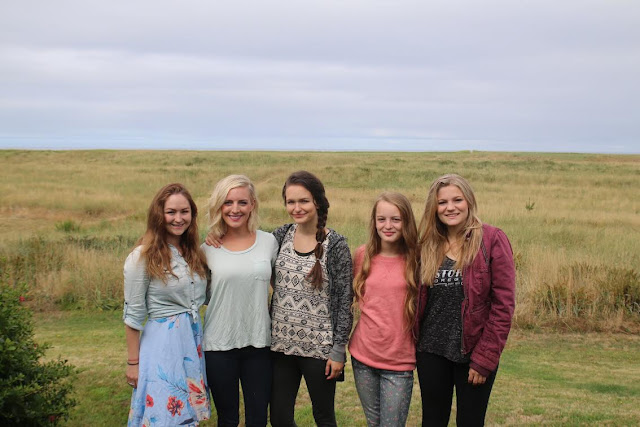 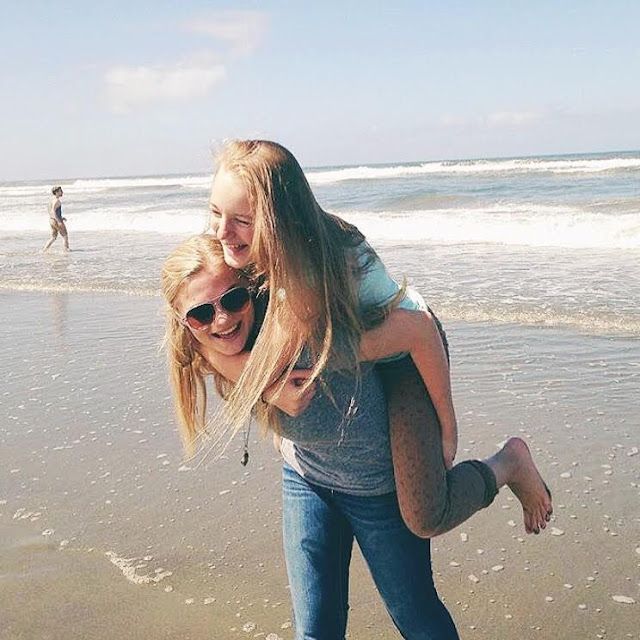 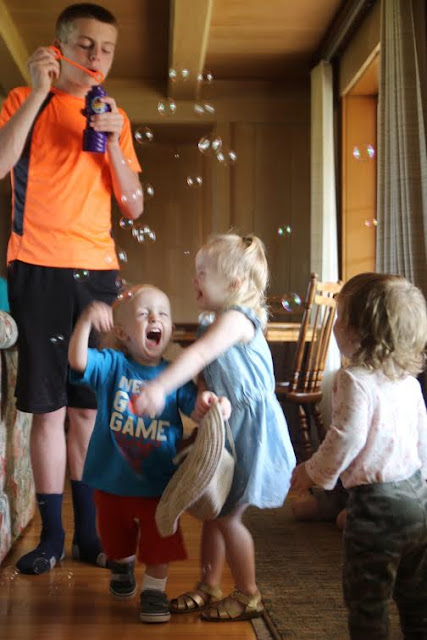 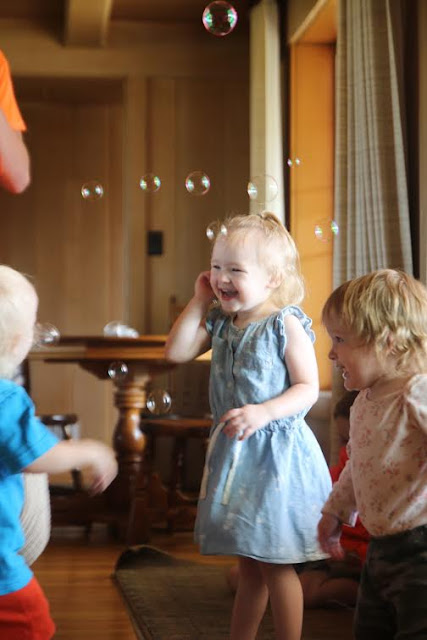 Heather and I brought piles of scrapbooking supplies and spread it all out on the big dining room table after breakfast each morning ... I'm happy to say that I managed to start and finish a 20-page album last week, something I rarely do. I think I have at least a dozen semi-completed scrapbooks from similar vacations, each missing the final few pages, which will probably be added in when all of my children move out some day. Which at this point will probably be when I'm 92, but hey- it gives me something to look forward to when I am finally an empty-nester. 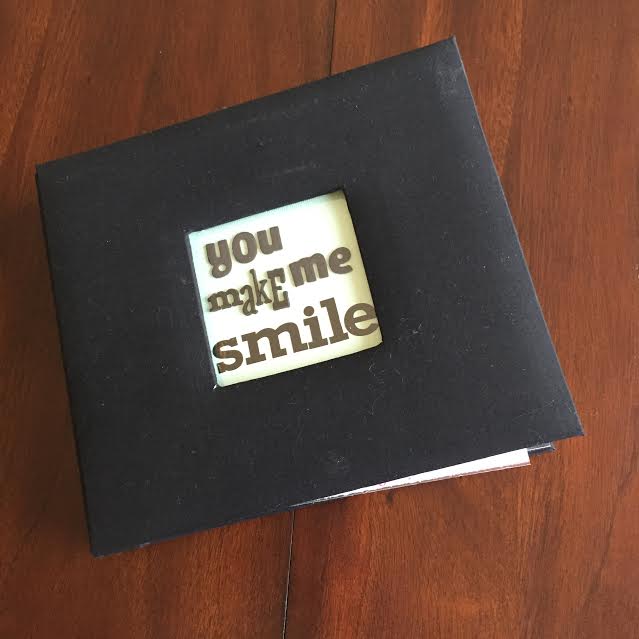 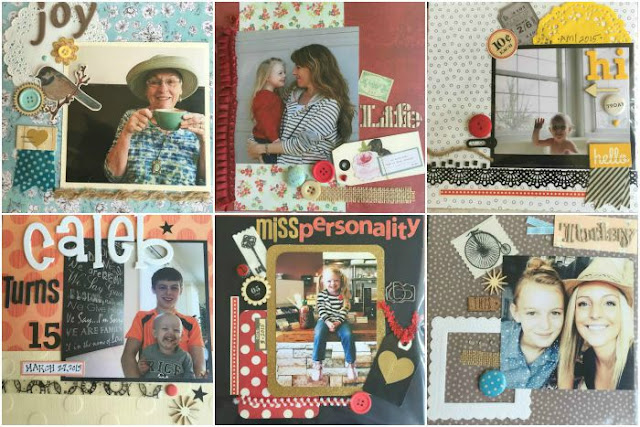 A few more vacation pictures and then I really should get dressed for the day. Or at least brush my teeth. 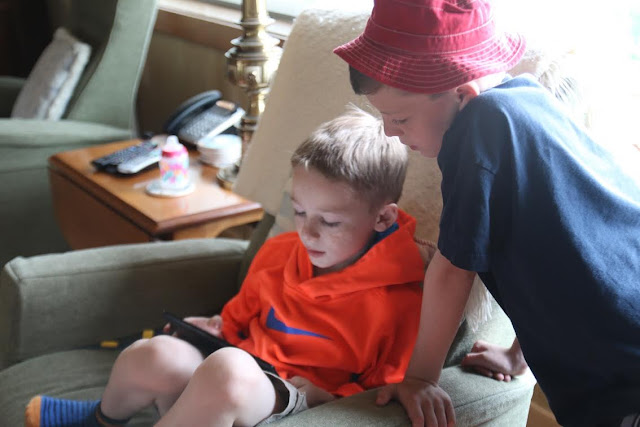 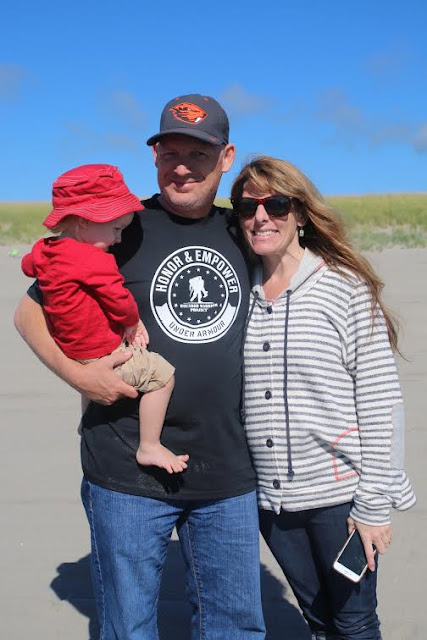 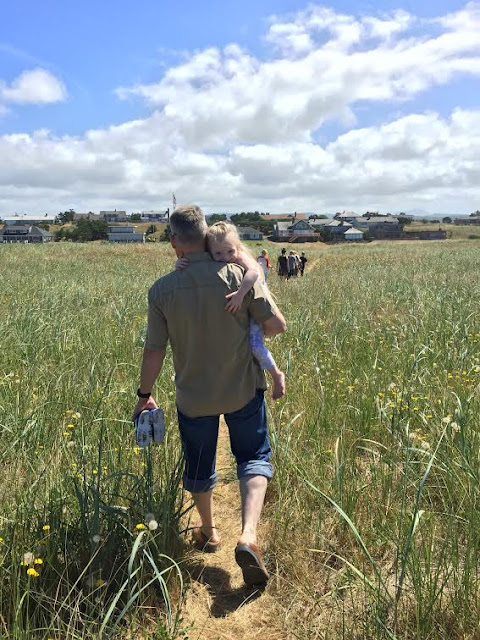 I'm so thankful for our time away with family, and grateful that our children will have these memories to carry with them into adulthood ... life is most certainly going to take us all in different directions, to separate locations and unique destinies, but we will always have these sweet moments to look back on, when we were all together in one happy place. 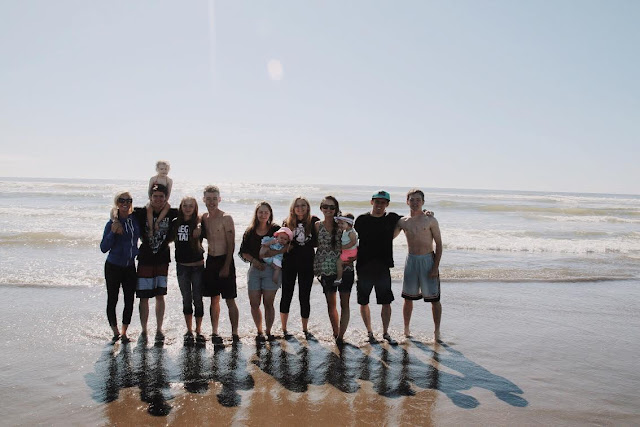 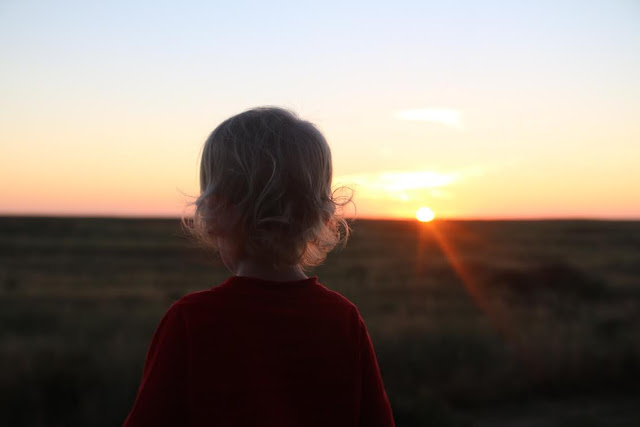 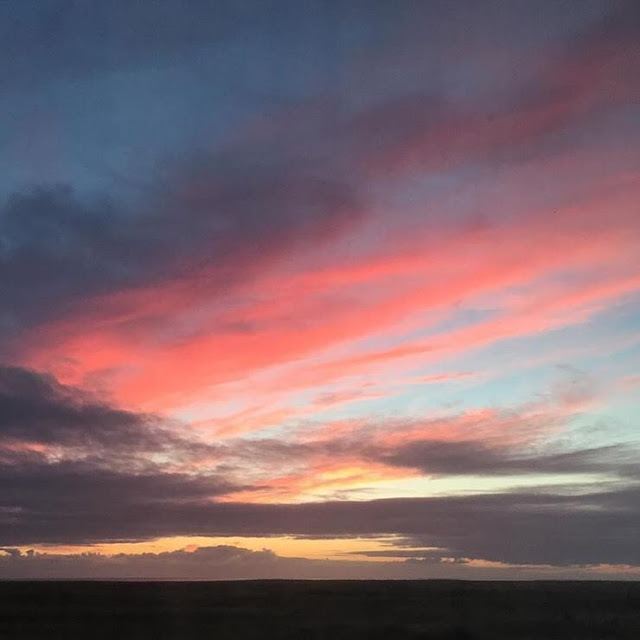 Awwww I miss you guys and I miss Heather too! Looks like a fun vacation,

I loved this! 'Adjust your mental image accordingly.' Made me laugh! I do the same thing though, want to visualize where you're sitting, what does the room look like... that's probably why I like touring people's homes too!

This is the only regrets I have of us moving "out west" while your cousins stayed on the "east coast". You could not grow up together. Loved the pictures and almost felt I was there with all of you. xoxox Liked those scrapbook pages as well.

Such a great post! I love all the pictures, but I think Hayden's expressions are HILARIOUS! My husband is asleep beside me, and I keep cracking up. Oops... Sigh.... I need to read your blog only in the mornings, I guess. Also, I know exactly what you mean about being able to picture things too well. Right there with you!

It looks really lovely there. How wonderful to have such a big, wonderful family. You truly are blessed. X

It looks really lovely there. How wonderful to have such a big, wonderful family. You truly are blessed. X

What wonderful time for your families. It is fun to see your joy! I love your photos, especially Sam carrying Lily on pathway. Beautiful!

So so so overjoyed that you're blogging! (Kiss emoticon) 😘

I also love seeing where people are so I can imagine their surroundings when I talk to them. :)

Love seeing you and Heather!!

Looks like such beautiful memories made!!! How wonderful to see the living fruit of ashes to beauty in Sam's family. Miss you! xoxo

I was just thinking of you!
xoxoxo

LOVE! So many blessings! In today's world there are not too many families who could say the same about coexisting in one space. God's grace truly abounds when we seek it!!! Thanks for sharing these precious moments!!

Thank goodness I can still keep up with you here. I was so sad to not find you on instagram. I so looked forward to your positive words and of course seeing all your cutie pies! I first found you on Instagram when we got the prenatal Ds diagnosis of our daughter "Merritt". I wanted to start seeing pictures of happy amazing families instead of cold outdated scary words. Finding you and several other families helped SO much! It definitely changed my thinking from dark/sadness to excitement/anticipation. Thank you!

So happy that you continue to blog. FUNtastic post! I truly enjoy reading your blogs and your writing style is FANtastic!

Congratulations! So excited for Lily and the rest of your family! Blessings to you all!