what can therapists do ?

Something happened to Lily back in December that I haven't shared here yet...I wanted to make sure what we were seeing was really a trend, and not a fluke.

That little something that happened was a major breakthrough. It's like someone flipped a little switch inside Lily's brain that said "Speech. It's time for it." She's always been a babbler, and she's had a few words here and there the past year that she used instead of signs.

But during the month of December, just before she turned three, we started noticing that she was dropping signs more and more and attempting new words.

Besides whatever happened in Lily's natural development, I really attribute so much of it to Lily's new speech therapist Edith, who now works with her on a semi-weekly basis. Edith has given us tools to teach Lily, and these tools are invaluable to me. Because although I had helped nine previous children learn to talk, I'm pretty sure they would have gotten it on their own.

Not so with Lily.

And unless you're a parent of a child with special needs, you might not know what I'm talking about.

Is the therapy we give them everything? Or are some things just hard wired ? I think there's a balance, and I think as parents we have to approach educating and helping our kids with that balance in mind. That old saying is true...you can lead a horse to water, but you can't make it drink.

However - you can give your child tools to learn to do what they want to do, and do it better.


And here's where I think it gets interesting regarding development in our kids with Down syndrome. I'm by no means an expert; I've only been at this for three years. But this is what I've seen ...


Lily WANTS to talk. She is not resisting speech. She is frustrated when she wants something and doesn't have a sign or a word for it, she imitates us talking, she watches signing times videos and literally LIP SYNCS the songs with Rachel Coleman (cutest thing ever!), she tries to verbalize her needs and if she can't, she uses her 150 plus signs to get us to see what she wants - she wants to talk.


So just like physical therapy is designed to put all those motor skills into place to teach a child to stand or walk or jump or kick a ball - speech therapy is helping us to give Lily the tools she needs to talk.


I've read a lot of debate on this issue of therapy on different Down syndrome forums. I've gone back and forth myself about what is useful, and what I already would have done with my child anyway, without the help of therapists. For example, nobody had to teach me to read books to Lily on a regular basis, or sing songs with her, or point to pictures in books and ask her what we were looking at. These were things we did with all of our children, and it just came naturally.

But there are things that I've learned through having therapists in our home that I never would have known, had they not come.


For instance, I didn't know that it was crucial to get Lily to try a variety of textures and foods when she was six months old...most of my babies nursed until they were a year old, and that was their primary food source. If they ate baby food or table food or snacks, they did so on their own, and some ate more than others. But our therapist, Karen, explained how important it was to introduce many types of food - hot, cold, spicy, sweet, crunchy, smooth, etc. - early on, because this would help Lily avoid the food jags that are so typical to Down syndrome. I'm so glad we heeded her advice, because Lily has had periods of time where she completely bucked anything other than her favorite "white" foods (cheerios, yogurt, bread, etc.). But because we had that tool to feeding, we persisted in offering varieties of food, and we're seeing great strides in these areas. 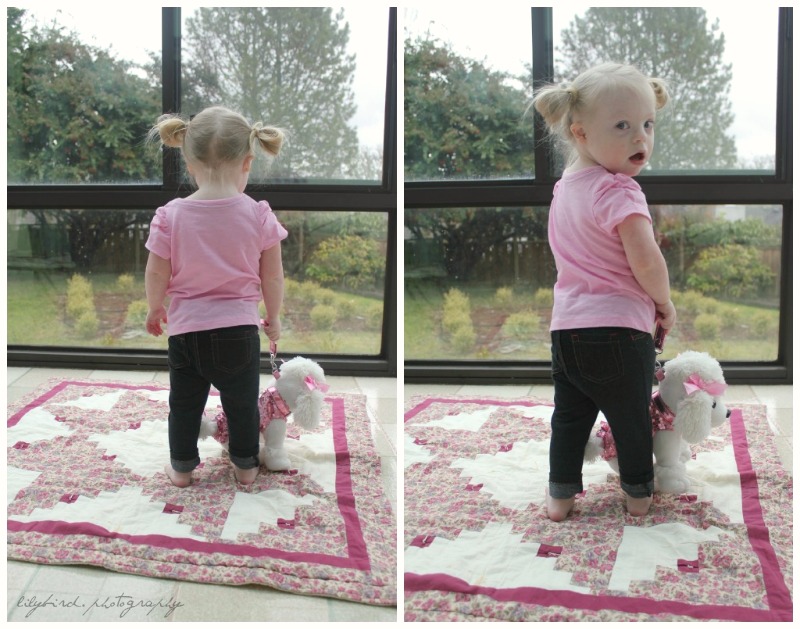 Edith, Lily's new SLP, has given me at least a hundred tools to use with Lily on a regular basis, and I cannot tell you - I CANNOT EVEN DESCRIBE TO YOU - how these tools have helped.

So I'll just give you some videos to watch instead.


And you know what's fabulous? Lily adores Edith. I mean ADORES Edith. She soaks up everything she teaches her, and without fail, we see results immediately. Last week when Edith came, she spent a long time helping Lily to say the "n" sound. For some reason Lily has had a harder time with this sound. I think every one of my kids learned to say the word NO very early on, but Lily just shakes her head. Every now and then she will say nuh-nuh-nuh for "no" if she is really upset, but it's not often.

So after Edith left, guess what Lily did? She went and got her doll, sat her on the stairs in front of her, and proceeded to teach her the sound "n". She held up flash cards, pointed to her own lips, "prompted" her doll by sticking her finger under her chin - and nailed the sound herself. 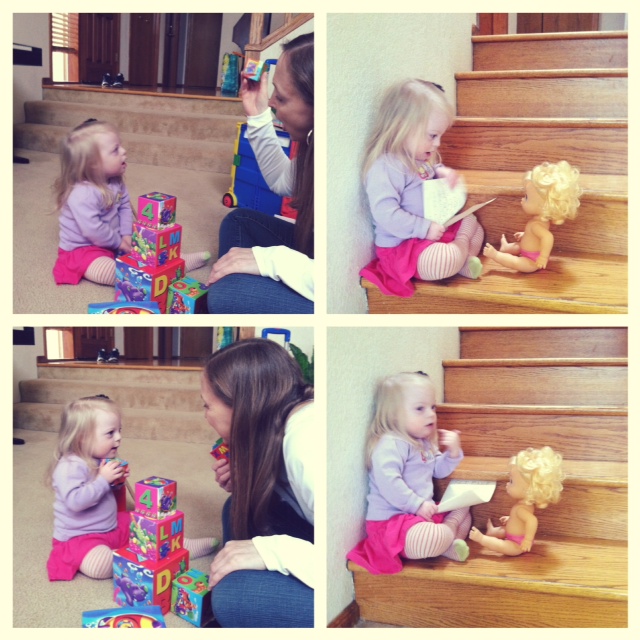 And that's what a good therapist can do. 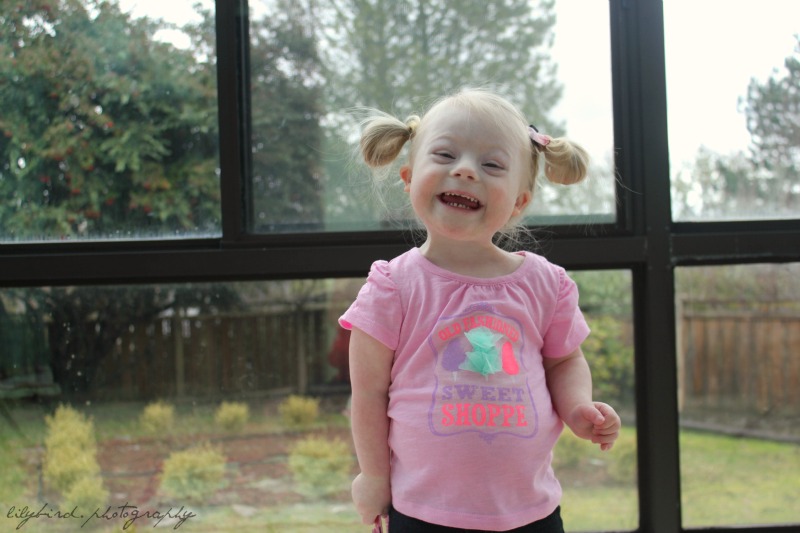 LOVED the videos of your amazing little girlie!!! And that's so fantastic that she's teaching her dolls how to do what she, herself, is learning to do. Fantastic!!

Patti, this is wonderful beyond words and so exciting! Thank you so much for the education I am receiving by reading your blog! And by the way, I think I might have to come to Oregon sooner or later! I want to spend more time getting to know you and I need another hug from Lily!

She is SO cute! And though I don't really "know" her, I am so proud of her! It's amazing what she has accomplished. And that first video, the one of her singing, well that just makes me smile.

I don't know how you can resist that cuteness! I love these videos!

I don't know how you can resist that cuteness! I love these videos!

Goodness gracious I started to clap during one of Lils videos and realized she could not see me. How silly, but I just got caught up in her progress. xoxoxoxo

She's so sweet! Love how she's progressing. The first video was my favorite!! Xoxo Lils

Oh my goodness I could've written this exact post about Abby and her speech therapist! She is having a word explosion right now and much in part due to her AWESOME therapist, Emily that she LOVES!!!

Yay to our girls!! xoxo

She is beyond adorable! Go Lily, go! Her articulation is really good!!!!

I see so many similarities between kamdyn and lily. Seeing your videos made me feel better, because kamdyn is in the same track, so I guess we're headed in the right direction. Kamdyn still struggles a lot with tongue thrust though. Looks like lily doesn't have that issue at all. Her tongue was always back. A lot of times, Kamdyn's tongue will be between her lips when she says something, so its harder to make the sound properly. We tell her tongue in, and she will but it pops back out. Your videos were great.

So exciting!!! We are so proud of lily....you can see in the video how hard she is working...what a sweetie!!! Give her kisses and tell her YEAH!! for us!!!

Oh my goodness! Those videos are all so cute!!

Hi,
Speech Pathologist here...love the progress and the wonderful videos! You are doing such a great job cueing her and she has such a marvelous attention span.
Her motivation to speak is amazing to witness. Keep up the good work! So happy for Lily and her family.

Haha, I thought it was funny too that we posted on the exact same thing minutes apart from each other! Great post Patti...I use to complain bitterly about Russell's therapies, but now that he is older I see he needs them and I could use the tips and suggestions that his workers offer.
Lily's speech is really coming along nicely. I love how she would actually form her mouth into the shape it was suppose to be for the word...That proves ST is working for her!!

My daughter started therapies when she was a year old. Her syndrome (5p- aka Cri du Chat) so often makes it so the children are non-verbal. The very name Cri du Chat describes the symptom of having a cat cry at birth. At six years old, after five years of therapies, my daughter speaks amazingly well. Her current ST was amazed at her vocabulary and I definitely give most of the credit to the amazing speech therapists she's had over the years.

Lily is so beautiful, so precious and so blessed to have such a diligent team working with her to reach her fullest potential.

ADORABLE! that is about the age Cate started talking as well - I can still remember the day she said "mommy" instead of just "eeee"! Of course now my challanges is getting her to be quite for more than 15 seconds. Oh how things change!

Lily!!! You are doing awesome!!!!! Signing Times is incredible! We all sign and I truly believe for us, it has helped promote Joey's speech development because him to be less frustrated. Love reading about Lily's progress-- good therapists are priceless!

Way to go Lily! Love her teaching her dolls!

Wonderful progress! Way to go!I love her attitude and willingness to try for Cheerios. That girl is a smart cookie & it's so encouraging to see her grow. Seven years ago I was trying to get my kindergartner to do those things. My daughter's SLP had her pronounce shirt by holding her finger in front of her lips and going "shh" first. Kara was so excited and kept saying, you dies (guys)! I did it! shhh, shhh, shirt! Delighted for you & Lily!

LOVE how she got her baby and did therapy with her!!! That is priceless.

She is doing WONDERFUL!! Benji has been in speech therapy for a while now, and we are now beginning to see progress. We are thankful for that too. He will be three soon, and his therapies will be complete. Trying to debate what to do. I know I discussed with you before. Speech will probably be beneficial to keep!!

Thanks for posting!! She just cannot get any cuter; I just want to hold her. xoxo