Russian Orphans...what you CAN do

At the beginning of this month, as many of you know, Russian lawmakers passed a bill that bans Americans from adopting their children. In doing so, they sealed the fate of orphans with Down syndrome and other special needs, who will now spend the rest of their lives in mental institutions.

And yes, my blood is boiling as I type those words.


Children with names...Artem, Olga, Albina, Nanette, and the list goes on. Families who were mid-process in their adoptions - who had perhaps traveled once already, but were waiting on a court date- are now walking a tightrope between faith and fear, praying for a miracle. Unless Russia lifts the ban, or allows an amendment for children with special needs, these children will not be coming home.

Both of those prayers are ones I'm lifting daily, and I'm asking you to do the same. The ultimate, best solution is for one of these to take place.

But in the mean time, there is a way you can help, and I'm featuring Amy Livingston here today to tell you how you can do so. You may remember Amy, and her amazing story from a year and a half ago. That post was entitled Transparency and Awe, and I still love going back to read about the miracle God did for little Pauline, now named Lina. 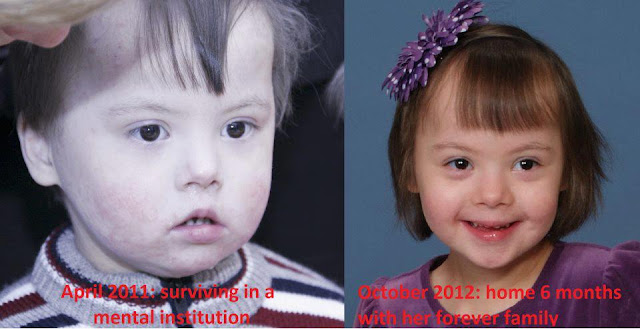 Please take a few moments to read Amy's words...I pray you are able to help.


Everyone has been in a frenzy since Putin signed the ban on US adoptions a few weeks ago, wondering how we will ever reach the sweet children who are suffering due to this new law.  While we wait for politicians and foreign governments to hash things out, there is still a way we can reach some of these children... children who are in the most need.  Children who are locked away in psycho-neurological institutions... mental institutions.  Children who have no hope of escaping this way of life unless they are adopted.  And the only families interested and able to adopt these children with special needs were here in the US. Our Lina had been living in one of these institutions for over a year when we got to her, and part of my heart will always remain there in Russia with the ones we left behind.

There is an absolutely amazing volunteer organization, Russian Orphan Opportunity Fund, based here in the states that works in Lina's former institution, Belskoye-Ustye.

ROOF first entered the institution in 2000 and found it to be an absolute nightmare.  Lack of running water, holes in the ground for toilets, "bath houses" so scary that the volunteers opted to bathe down in the river instead... odors so strong it brought tears to their eyes when they entered the building.  When we arrived at Belskoye-Ustye in November 2011, we found nothing of the sort.  The facility was very clean- there were no odors whatsoever, the children passing by in the halls appeared happy and nourished, and Lina was even eating an apple two of the three days we came to visit on our first trip. We found lovely children's furnishings both in Lina's groupa as well as the psychologist's office where we spent our time with Lina.

ROOF began running a summer camp during the month of July, and this past year they have been able to increase the frequency of sending volunteers to work with the children.  This is the only exposure to educational opportunities these children get.  ROOF is now working on new programs for the older children ready to age out in hopes of saving them from transfer to an adult mental institution which is a death sentence.  ROOF has already spared a few from this fate. They have also been able to expand to a few places in Moscow.

So how do WE help?  There is a second psycho-neurological institution in Pskov, one that is still the hell hole that Belskoye-Ustye used to be.  I urge you to read Tesney's account of visiting this place when they were in the process of adopting Kirill.  He was the first child adopted from this institution, and I fear he may be the last if this ban holds firm.  There are several children listed on Reece's Rainbow who are currently fighting for their life behind these walls.

If ROOF can reach their goal of raising their monthly funding base (made up of loads of small donors who give $25/month) to total $5000, they promised to find a way to expand to this second institution.  This institution has haunted my dreams these past few nights.... Mike and I signed up to donate our $25/month back when we first learned of ROOF, before we had even traveled to meet Lina but learned she was living at BU.  We needed to help her anyway we could before we were able to get to her ourselves, and our donations continue to serve the ones left behind.  You can sign up HERE to either donate monthly or give a one time donation.  They currently have $1,473 coming in each month through recurring donations, and in order to reach their $5,000 goal they need 141 more people to donate just $25 monthly.  I beg you to please consider helping these children who have no other hope.  If the Russian government closes these doors to US adoptions, we need to be able to help the children behind those doors.  This law does not affect ROOF's ability to work there.  These children have committed no crime and should not have to be punished for being born with a disability. Please. Help.
Posted by Patti at 1:41 PM

Thank you SO much for sharing this!! We need every little bit of help we can get for the children who are left behind.

I pray this year will be filled with every blessing for you and your family,

Ever since I read about Krill's story in Tesney's post, this institution has haunted me. I just want to go there and take care of these children. My heart aches to think about what is going on behind those dreaded walls. Thank you for sharing information where we can make a practical difference and join together to help these children that have no voice. After reading about this, I felt so overwhelmed and helpless. I am excited to see people joining together to not forget and leave these abandoned kids alone.

Patti, thank you SO much for sharing this cause so near and dear to my heart. Georgia and her staff of volunteers are some of the most selfless people I have ever "met". We missed seeing them in country by just a couple days, but I see their works daily in the eyes of my precious daughter. I have faith we will meet in person one day! :)

I read about Kirrill a while ago, too. So haunting. Thank you for sharing.

Also a correction if I may... I had to change the web address of my adoption blog mid process since we were cautioned to remove any mention of her name. It seems since I took it down that someone else decided to claim it- not sure if they are a troll or what. Anyway, if you are looking for more of Lina's adoption story you can find it at www.gracefulbutterflywings.blogspot.com or read updates on our family blog at www.amysramblingsandreflections.blogspot.com. Thanks! :)

Thank you SO much for sharing! I just gladly signed our family up for a $25 donation each month!

Thank YOU so much, Erica!! xoxo

Patti, your readers was so supportive of us in December by using our Amazon account. I want to offer to donate whatever money comes in from today until the end of the month to ROOF. Please let your readers know. I am at 6% right now so 6% of what they order will be donated to the ROOF fund. http://www.amazon.com/?_encoding=UTF8&tag=wwwoperationo-20