I'm sure most of Lily's readers remember The Six Day Miracle that took place for the Dirkes family, who brought little Charlotte home in March. I've had Charlotte's "She's Here!" announcement on my refrigerator ever since -- it is a constant reminder of what God can do through the hearts of like minded people.

Charlotte's mama, Kelly, posted on her blog about another little girl who has stolen her heart and mine. I've blogged about Kacey before...she is still waiting for a family, and as you'll read below, that window of opportunity is closing. I went to bed last night with Kacey on my heart. Her beautiful face haunts me. And what kept going through my mind over and over, as I pictured her tiny misshapen hands and soulful blue eyes was this thought : What if that were Lily?  I went to sleep praying for a mama for Kacey...no little girl should spend her life in an institution, waiting for a family.

I asked Kelly for permission to re-post her words here. As thrilled as she is to have her daughter home, her heart still aches for those left behind.

I'm asking Lily's readers...no, I'm begging Lily's readers to please share Kacey's story and picture, in hopes of finding her a family. If I had a fabulous prize or two, I would host a giveaway today to find Kacey a family. I cannot stand the thought of her waiting any longer.

PLEASE share Kacey's need wherever you can, and please pray for a family to go and rescue her. 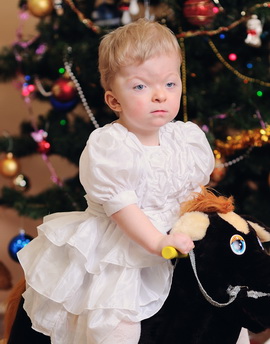 
Hope and Heartache by Kelly Dirkes

The pictures of a little girl, snuggled close to her mama and papa for the first time, were images of redemption.  Her brown eyes sparkled as she realized that they were there just for her.  She reveled in the undivided attention.  She soaked up every ounce of care and affection.  She slept peacefully under a blanket made by siblings that were still half a world away.  She was loved.

The pictures of a second little girl, absentmindedly playing with a dandelion stem, were images of loss.  Her bespectacled blue eyes showed no light or cheer.  She stared blankly at the woman holding the camera.  She watched longingly as her friend was buckled into a stroller and taken for a ride.  She never said a word, but her face spoke volumes.  She wanted to be wanted. 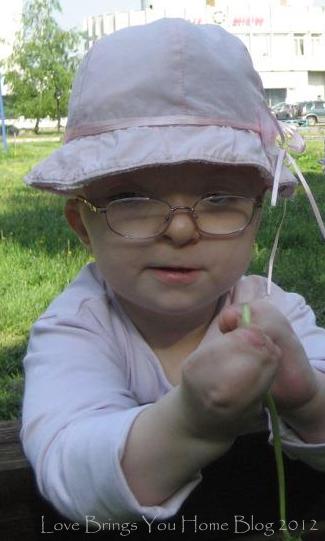 On their last day of visits, a caregiver asked that the first little girl’s new family take pictures of the children with special needs and advocate for them.  They had seen what love had done for the little girl during the week that her family was there in the special rehab facility.  So, one by one, the children were carried in, set down on a chair, and encouraged to smile.  When the caregiver pronounced the impromptu photo session complete, the woman with the camera knew that one child was missing—the child with the dandelion stem.

No one would want her, the caregiver insisted.  Her picture was taken anyway.  She was told over and over that she was beautiful.

Kacey’s time in her wonderful baby house is coming to an end.  She turns four in the coming months, and will most likely encounter attitudes like those of the rehab hospital caregiver with increasing frequency.

Can you heal Kacey’s heart?  Could you be her hope? 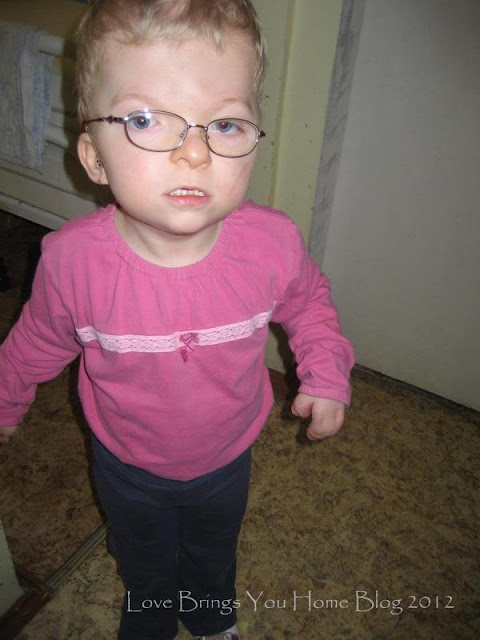 I have been praying for Kacey ever since I read Kelly's post about her. I have such a soft spot in my heart for children with Apert's syndrome in that my wonderful 28yo cousin has Apert's. Kacey is absolutely beautiful and I pray that her family finds her soon.

She has been heavy on our hearts. Praying for Kacey over here in Oregon.

Patti, my list keeps growing but I am adding Kacey to it. Wishing I were so much younger and able to take this precious treasure home.

I have seen her face before. She is precious!!!! I will spread this Patti. What a blessing she will be to a family. I will be praying for her too.

Spreading the word one facebook status at a time. :) Thank you for being her advocate.

I am praying so hard for her. I want her but I just don't know how... it seems so beyond possible for me right now but that breaks my heart. Since I read this I have kept her Reece's Rainbow posting open and I keep going back to look. Oh man.....praying and praying hard. For her and for me. When do you know whether its right to do something so out of the realm of anything else that you have ever done in your life, and do you do it if you are the only person in your life that supports such an idea?

I have been thinking and praying for beautiful little Kacey since I first saw her on RR. I shared your post on Facebook. Praying her family finds her soon!!