Tonight was a spectacular night. For several reasons, not the least of which was a night out spent with my husband and good friends. The last time we got out of the house alone was my night in the ER last week...to say I needed a little break was an understatement. I've been going to church, and I did manage a trip to the grocery store last Saturday, but that's been about it. I started taking iron last week, and I've slooooowly started feeling more like myself again....

So when my brother texted me this afternoon and said, "Michael Medved is speaking in Corvallis tonight!" I jumped on google to find out where. Which says a lot about how much better I'm feeling, because a week ago I would have texted back, "awesome, I'll send Sam." Turns out he was speaking at a large church in town and tickets were available at the door. Booyah, baby! And while I don't talk too much about politics on A Perfect Lily, I will just say that I love Medved's passion for LIFE. Which is what he spoke about tonight.

He began by talking about- of all things - his wife's first miscarriage. I had no idea the Medveds lost a baby; twenty-six years ago their first pregnancy ended at five months. He talked about his wife's rushed trip to the ER and seeing their tiny baby's heartbeat on the ultrasound....I felt my heart beating faster as he described the emotions surrounding that loss. I'm trying hard not to blog about it as much as I think about it, but I am still very much in the grieving stage of this miscarriage. I wrote a long final entry in my baby's journal the other day, and I almost published it here, only because I think it may resonate with other moms who've experienced the loss of a baby. I still may in the future, but for now I'm trying to focus on the positive. Anyway, Michael and his wife's experience hit so close to home that I was drawn in from the get-go.

He went on to talk about initiative #25, one that many are working hard to get on the ballot in Oregon this fall. The amendment language is based upon constitutional-law attorney recommendations and similar amendments to the Arkansas and Rhode Island state constitutions. If approved by voters, the following statement will be added to the Oregon State Constitution:

No public funds shall be used to pay for any abortion, except to save the life of the mother or as may be required by federal law.


If you'd like to read more about it, you can do so HERE. Our state has been in a budget crisis for quite awhile, and yet from 2003–2009, $11.1 million of state money was spent on over 26 thousand abortions. Mr. Medved said that whatever your views on abortion, we as taxpayers should not be forced to pay for something many of us are morally or fiscally opposed to. He said something else that stood out to me: This initiative will not stop abortions, but it will stop our complicity in abortion. I like that.

At the end of his speech a call was made to help circulate the petition, gathering signatures needed to get this initiative on the ballot in November. If you live in Oregon and are interested in signing this petition, you can do so HERE.


After the speech, we went out to the foyer where Michael was greeting visitors and signing books. And here's where Patti the Advocate made her public debut. My husband Sam and our dear friend Larry shoved me towards Medved gently talked me into getting my picture taken with Mr. Medved, so that I could prove to my brother Chris what a great sister I am.

I have to explain that Michael Medved is pretty much the fourth person of the trinity in my brother's opinion (only he's also Jewish, so not sure how that really works) and getting an autographed copy of one of his books for him should pretty much put me down in the annals of sibling history as The World's Greatest Sister Ever To Live. (sorry, Hope.) 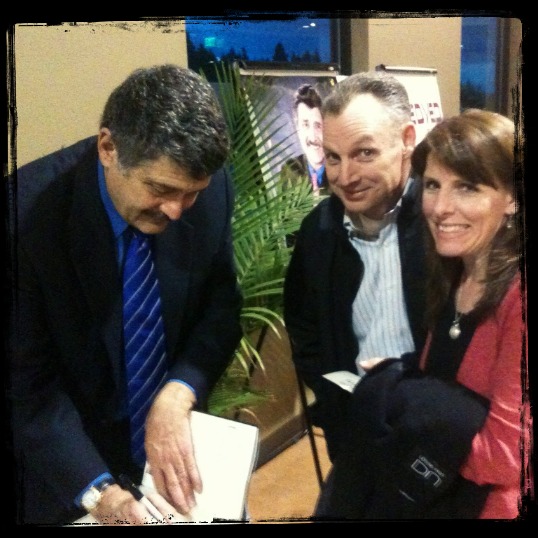 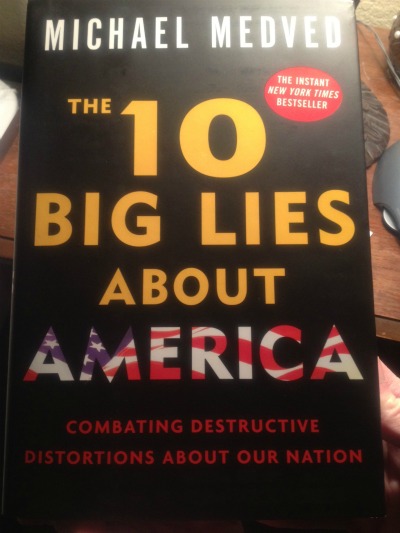 And of course while chatting with Michael, I had to do my advocacy thang. I told him we had ten children, the youngest of whom has Down syndrome. He complimented us on our large family, and I jumped right in with my point.

"Are you aware of the new early prenatal testing for Down syndrome?" I asked him, and he immediately began nodding his head.

"Are you also aware that the new health care bill has this prenatal testing listed under preventive care?"

He said he was, and when I asked him what he thought about that, he said he thinks it's a shame that our government wants to step in and play God and decide who has the right to life, and who doesn't. He said that we are privileged to see firsthand what a blessing our daughter is, and how valuable her life is, and that this view of our children as being disposable is what is wrong with this kind of thing. I asked him if he felt that the fact that this testing is being listed under "preventive care" could be seen as anything other than a push for abortion. He shook his head and said that there's no question that's what this is all about- that the testing will screen for babies with Down syndrome for the purpose of reducing costs.

We didn't have time to discuss what this means- that although women will have a choice about what to do with positive results, the outcome is obvious: abortions will rise, because the diagnosis will be given at an earlier, more "convenient" stage of pregnancy. And once this test is mandated...but I digress. You can go back and read more about that here, if you missed it.

Here is a photo of me, deep in discussion with my new pal... 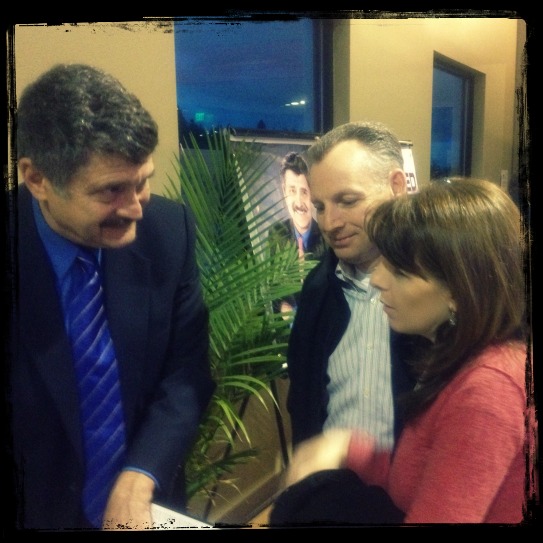 Anyhoot, it is late, and I am happily exhausted. My Lilybird is snoring heavily on my lap, and my pillow awaits.

I'm crying too! I can't believe you got me an autographed book!

So glad you had such an inspirational night ~ love your heart!

I love Michael Medved, and I have read the 10 Biggest Lies About America (highly recommend it!)!!! I am so jealous, I would love to meet him. I'm so thankful for men like him in our country, that speak the truth with eloquence and passion!

Sometimes, you make me laugh out loud. We are kindred spirits. :-)

How fun!! I am SO glad you got to do this Patti. Wow, how wonderful the way it began due to everything you have been through. Sounds like a great evening.

Much love to you!

How much of my tax dollars are paying for war? More money and more children are being killed. We all pay taxes for things we are morally opposed to.

You have to love the defensive (yet anonymous) stance
-John

I guess they skipped over my comment criteria :) I will say that the beauty of America lies in our ability to self-govern. If we don't like something, we can form a grass roots movement, gather signatures on a petition, take it to the polls, vote for change. We don't have to just sit back and say "all of us pay taxes for things we are morally opposed to"- we can make a difference.

Oh Patti, please do post a blog of your last journal entry to your baby.

I love Michael Medved, he is so intelligent, straight forward, and sensible. I would love for him to be on Fox News someday.

Here's a non-Anonymous comment that agrees with Anonymous. Millions of taxpayers who were morally and fiscally opposed to the Iraq War were nevertheless still "complicit" in this war--which Michael Medved strongly supported. Some of my taxpayer money goes to the Catholic Church -- am I thereby complicit in the sexual abuse and pedophilia that went on in that Church, and the Church's silence and refusal for decades to punish the perpetrators?

Your point about our ability to self-govern and vote for change is a nice one. But it's a naive and idealized vision. If that is the beauty of America, why would you vote for a party that: a) disenfranchises voters (disproportionately Democratic-leaning ones) through dubious "voter fraud" campaigns, b) supports Citizens United, which would basically allow corporations to make unlimited contributions to political campaigns, thereby increasingly marginalizing the individual vote?