one step at a time

As Lily's ear tubes surgery approaches I am getting more excited about what she will be hearing afterwards. She's signing so much, and seems to understand so many words- and yet the doctor says she's only hearing as if she's under water. Which makes me think we are in for a huge explosion in speech and signing as well. Because if she's doing so much only hearing as if under water...what will it be like when she comes up for air? 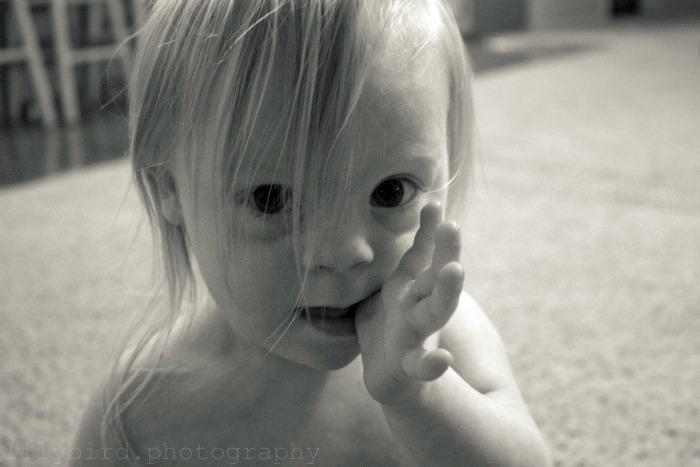 We had her IFSP yesterday, and I was amazed at how far she's come in just six months. I remember setting a goal last fall at her IFSP of Lily walking independently for 5 feet...this was a long term goal, and I remember feeling skeptical that Lily would reach it any time soon. Lily was just beginning to stand independently for a few minutes at a time, and it took her quite awhile to get there.

But now here we are six months later and she walks everywhere- around corners, on a variety of surfaces- walking is her main mode of transportation. And I had a hard time seeing her walking five feet at this age. To say that she amazes me every day is an understatement.

So back to speech and hearing. This video to me is priceless. Because this is a little girl who has only been hearing at 50 decibels, when she should be hearing at 25. She is trying so hard to approximate words and sounds, and she comprehends so much and communicates so much in spite of not hearing well...I have a feeling that in a few months I'm going to be just as blown away by how much progress she's made in speech, as I have been when it comes to walking.


This next video is equally priceless...because I remember a little over a year ago watching a video of a friend's baby who was the same age as Lily, playing with a doll. She reached up for her baby doll and held it and rocked it so tenderly, and at the time Lily was nowhere near wanting to play with or "mother" her dolls. She didn't even have the arm strength or gross motor coordination to do that even if she did have the cognitive ability to do so. And this is where I've learned so much about Down syndrome. That extra chromosome doesn't necessarily mean Lily won't hit a milestone...it just means it might take her a little bit longer to get there.

Now Lily is obsessed with her baby dolls. She hugs them, pats their backs, rocks them to sleep, kisses them, feeds them bottles, tries to change their diapers, wraps them and unwraps them in blankies a million times...and if her nephew is over (who is a year and a half younger than she is), she tries to mother him. She holds her tiny hands out and signs "give me" and "please" over and over, until I settle him in her lap...and even though he weighs several ounces more than she does and is almost the same length, she treats him just as if he were one of her little dolls- delicately and tenderly and as if she truly is the older auntie, taking care of her baby nephew. (I wish I had caught all of that on video, but Baby K was asleep when I was filming, so I only got the doll;))


And as I'm ending this post about my amazing little girl, she's practically running in circles in front of me, laughing and grinning over her shoulder at me the whole time.... because she knows she's a big girl now.

O my. She has a lot to say. And if you use a tiny! bit of imagination? O you can totally understand her. Thank you for the videos. My boys are just as enthralled as I. :)

I love the signing video, but the one with the baby doll is priceless! Watching Lily try to put her baby in the carseat, and then her sweet grin at the end ... oh, that is heart-melting footage you captured! :)

wow, I didn't know Lily's hearing impaired! It should definitely be interesting to see how much more she takes in, post-surgery. When will it be?

She is absolutely adorable. I love watching her play with her baby! Typical little girl!! Loves acting like a little mother. My son is 9 now and I often wondered if he would "play" like other little boys. He sure does! He has a basketball game tomorrow and you should see him ride his 4-wheeler. And I don't mean battery powered. The real thing. There is nowhere he can't drive it! Amazes me daily! Love your blog btw!

meriah- two weeks from yesterday!
missy hankins- that is so sweet...do you blog?
solace mama- i keep meaning to email you back, life has just been crazy :P
brit- thank you so much...that little grin was my favorite part too :) thanks for the sweet comments!

She will amaze you, I know it
In her time--which will be in a few weeks!!!

what day is the surgery?

Oh my goodness, Lily is such a sweet little Mother, I loved that video!! Russell is not very gentle with dolls...Or babies! lol

Lily is one smart cookie, she understands everything perfectly, so just wait until she can hear perfectly she is going to knock your socks off!!

Such sweet videos! It makes me miss having a little girl. I love how vocal she is. My 20 month old pretty much just grunts.

Those were both so enjoyable to watch. She is growing up and that is a little sad for some reason.

Hi Patti. No, I don't blog. Wish I could figure all the layout stuff out. I think we are mutual friends on fb. I do post a lot about Austin on there. And as my daughters like to point out "you'd never know mom had other kids". Haha. I adore my daughters but they are young adults and always on the go. But Austin is a camera hog so hence lots of posts about him.

LOVE when you post videos!! And seeing Lily in action IS priceless. These are SO precious Patti. Seeing her with her little baby is just too cute. I will have to show to the kids. They will love it. Benji gets SO excited when we mention Lily and loves watching as well. He does that same cute grin she did in the end of the video with her baby. He really likes to bring that grin out when he is doing something he knows he shouldn't; it is funny. Thank you for posting. I could watch her all day.

I JUST watched the videos--BE STILL MY HEART
Patti, Oh my goodness

She is doing amazing things & so PRECIOUS
Lily with her baby!!!!!!!

I love the videos! And so did Levi! He started doing Itsy Bitsy Spider when her heard you say it and say Lily sign. I think he's got a crush on her!!!

She is doing so well, and it is exciting to think about how much more she'll do when she "comes up for air" (loved that, by the way!).

Yes, one step at a time. She will achieve everything, just continue to dream big for this kid as I know you do! She is so adorable!

That was priceless. She is seriously cute. My 5 year old watched the baby doll one with me, and she said that Lily and Kamdyn look alike and have the same hair. Kamdyn doesn't wrap up her babies or change their diaper yet, but she hugs them and rocks them. It's really cute. Loved the videos.

Needless to say Grammi is grinning from ear to ear. Love the video's as they bring Lils to life for me.

I love the doll video. I wish Addison would get into dolls. They are dead to her (STILL!)
Can't wait to see the difference in her signing and talking. She's doing amazingly well for only hearing at 50%! Super impressed!

Oh yes, you will be amazed at the huge progress she makes in speech after she is hearing well.
I am adamant about getting the girls hearing checked very regularly just to ensure that they are getting the best input possible. Can't wait to hear Lily's explosion.

she is a darling! x

Hi,
Do you know where I can donate to Charlotte? I missed the giveaway, and I can't find a place to donate. I looked on Reeces Rainbow, but I assume she has another name there, as I couldn't find her. Thanks!

Thank you for asking, Emily...here's the link to the Dirkes family's sponsorship page on RR (although Charlotte is listed as Maria.) http://reecesrainbow.org/9184/sponsordirkes

hello! Our little Ethan, 4 with a little something extra special has had 6 sets of ear tubes starting at the little age of 8months. I know the feeling I worry sick every time and I should be a pro by now!! I will say a very easy surgery at least for my little guy. The surgery itself is only like 10min. I am sure your precious Lily will do wonderful!! Love the video!! She is so cute!

If you have any questions about the ear tubes contact me like I said we have had 6 and will be getting number 7 shortly.