If you hadn't heard the news, a little miracle has happened on Olga's chip-in over to your right  (called Breaking Starfish Free.) 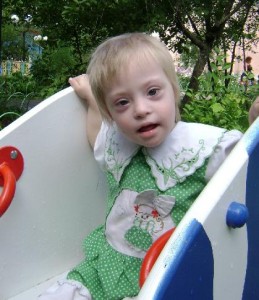 You finished the job.

Olga's mommy and I were texting furiously back and forth tonight when we realized her chip-in was just about full. A huge donation had just come in, and I wanted to know if that was "the donation"- the $500 donation that had been pledged to match dollar for dollar donations that came in over a 5 day period. Jenn told me that it wasn't- it was from a donor who had come through a connection with someone named Molly Auble. I texted back to Jenn- who was Molly Auble? We were both so excited, as we realized the matching $500 donation hadn't even been made yet- meaning Olga would be almost fully funded once that was made.

Just as I sent that text I had a flashback- I remembered getting a comment last December from someone named Molly....I quickly searched my December emails and found this...

Hi Patti!!! I am Olga's Christmas Warrior!!! Obviously I am overjoyed about all this and am SO GRATEFUL for your compassion. We had a fundraising party for her DEC 4th and prayed before it that ultimately someone would see Olga (and Nicholas) and adopt them!!! GOD IS MIGHTY TO SAVE- look fwd to seeing who the lucky parents will be!! Peace and Joy, Molly Auble


At that time I didn't even know what an "Angel Tree Project" was, let alone a Christmas warrior. I just saw Olga's pretty little face on my friend Stephanie's blog and fell in love with her...I had no idea she even had a "warrior" assigned to her...an Angel Tree warrior named Molly Auble.

And you know what is amazing about that prayer meeting?? It happened on December 4th. And that night, I could not sleep- because I was consumed with a little girl.... named Olga.

So late at night I wrote this post called Just One without even knowing Molly and her friends had been holding a prayer meeting, hoping someone would notice Olga.  Three days later I wrote The Most Important Post I Have Ever Written, starting a fundraiser for Olga that ended up giving her a $13,184 grant, thanks to literally hundreds of amazing readers.

I fully believe that Molly Auble's prayers brought me to Olga, to help my friend Stephanie shout it from the rooftops that Olga needed a family...which led to the Abell's committing to adopt her...and now, coming full circle, Molly helped finish the job she began.

Is anyone as amazed as I am at the little details of Olga's journey home??

Oh, that post I wrote called Just One? It was based on the Starfish Story. I wanted so much to help save just one starfish.

And the name of Olga's mama's blog? Which she started without ever reading that post?  Saving Our Starfish.


Can I just tell you that you people are flipping AMAZING? You rallied for Artem this month- his grant fund is now at $11,387...meaning almost $4,000 came in for him. And now you've helped finish the job for Olga. All in one little month of Down Syndrome Awareness. And we still have one more day to go!:)


Thank you just doesn't cut it. Thank you for being some of the sweetest, most gracious, most generous folks on the planet. Thank you for helping to save not one, but five little starfish this year.

As I sit here in tears I can't thank you & your readers enough. As I told the matching donor tonight, there will never be enough words to truly express how thankful we are for each of you and all you've done for Olga and us. I can't wait until we can post that we've been submitted!! I'm so excited, it feels like our journey is just beginning now and we can't wait to share the rest of it with you all. From the bottom of our hearts THANK YOU!!!!

God is good! What news to praise Him for this morning! Can't wait to see the Abell's journey continue... Thank you, Patti, for the call to action :)

Five little starfish waiting in a bed. One looked sad and bumped her head. But now she has a Mama and her Mama said, "It's okay my precious child," and she kissed her sweet head.

AMAZING!!!! I get asked sometimes why I think God gave Aubrey to us...She is the reason we know about Reece's Rainbow and all these fabulous littles around the country. We are helping save others....because we have Aubrey and that is reason enough:)

What a great way to start the day!! I popped on here before getting ready for church, and now I'm sitting here with tears in my eyes - how wonderful!!

God is so awesome!

Praise God- He is SO good!! I cannot wait to see Olga at home.

chills! so awesome and amazing!

This is so exciting! I hope Olga can come home soon.

I have chills! I can't see chip in on my iPad so I'd been wondering what it was up to all weekend! God works wonders when we listen to Him! And Molly, you are an amazing blessing! Patti, does she have a blog that you know of?

I got goose bumps reading about the starfish coonection between Jenn's blog and you picking out the starfish story. I remember the story. It is one of my favorites just like the Footprints in the Sand. I am ever so excited about Olga, I have never stopped prayingfor her. I will continue until she is home. Her precious face stares at me when I am at my PC.

Good Grief woman!! I am crying again. Been crying way to much lately but these are happy tears. Wish I could kiss that sweet little lady, Olga, and give her a hug. Mom