Sissy finally came home from vacation with her camera, and I was able to take a few pictures this morning before our day started. There's a penny carnival at Central Park followed by an old fashioned ice cream social...your brothers and sisters have been asking every ten minutes when we're leaving so I need to make this quick!

You've been learning so much lately, just really turning into a little toddler as far as your fine motor skills and language...and attitude.  I'm learning that "toddling" doesn't necessarily define this stage- you show plenty of signs of turning that corner from babyhood without actually walking.

For instance, you're perfecting your pincer grasp every day... 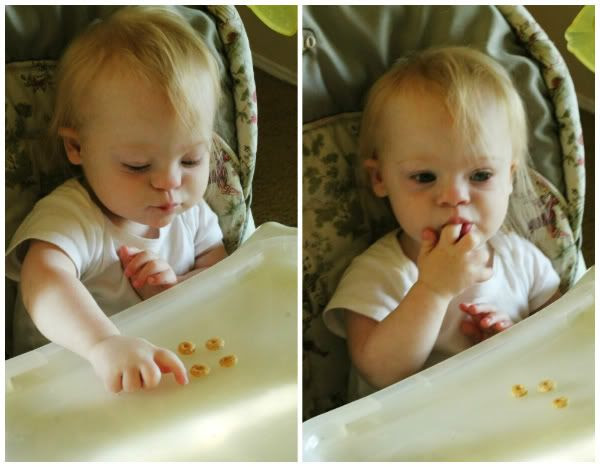 We tried to catch you saying and signing "more" on video. As luck would have it you did do both- only the camera stopped because the card was full. When I switched cards you decided to be a tease and employ your fake laugh when we asked you to perform.

And of course as soon as I switched from video mode to still photos, you signed and said more.

This is your favorite position for eating..foot propped on the tray alongside your food, and in between bites you suck your big toe. Disgusting and adorable all at the same time. 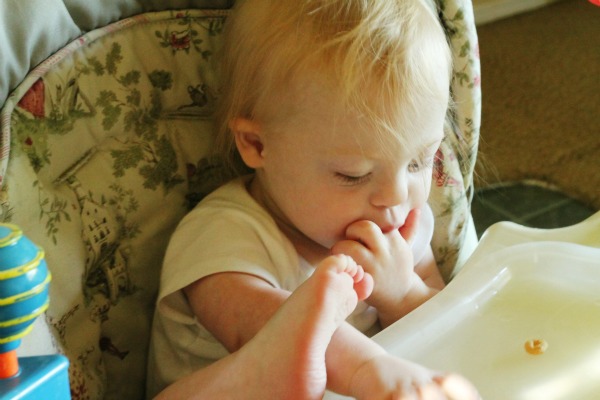 You still like to display what is fondly known as "the classic bulldog" face when we try to get you to smile for pictures. 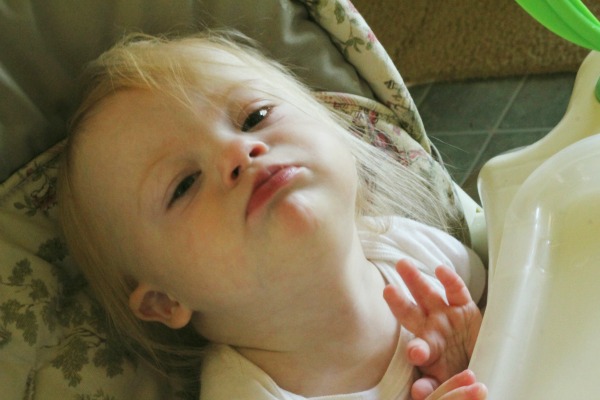 Followed by your deadpan/bedhead look. It's the face that says, "I am not into doing a photo shoot at the moment, Mom- just hand over the cheerios." If looks could kill.... 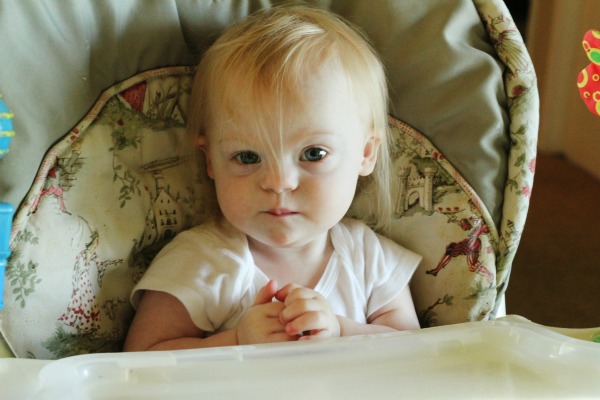 And as always, you get all goofy when your sister tries to get you to sign for the camera. It's like you know what we're looking for and you will try any tactic to avoid what we're asking you to do. Yup, you're a toddler. 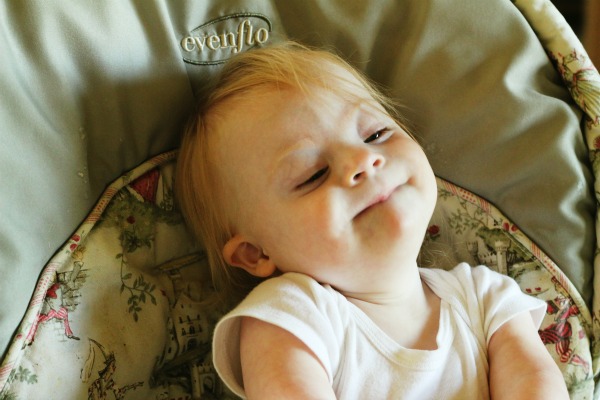 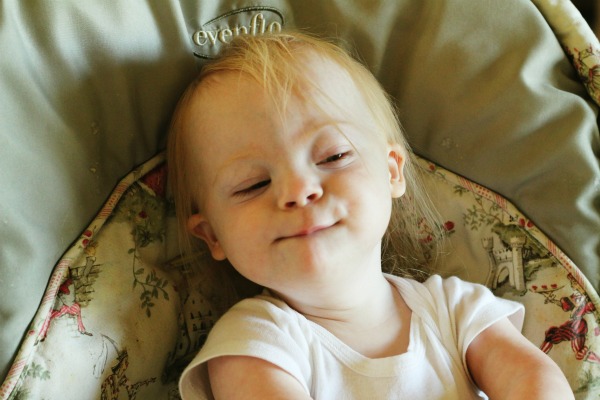 I wish I had this on video...you've turned into quite the little vocalist. If music is on you love to sing along, or sometimes just while you're playing- you just suddenly bust out with a tuneful "aaaaAAHHahhh" sometimes followed by and "oooohhhh" and then you get the biggest grin on your cute little face. 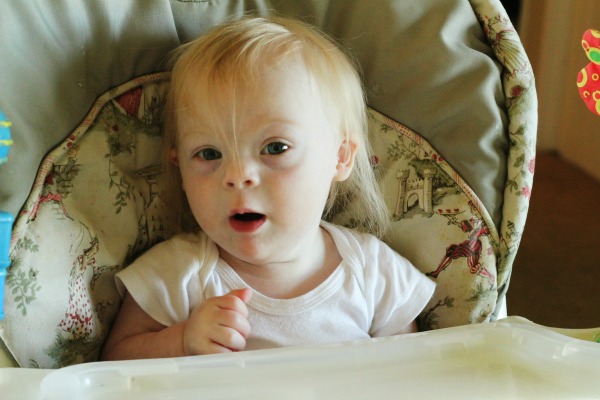 I'm not sure what this sign is all about..maybe it means "talk to the hand, not to the face" ...because that seemed to be your attitude this morning. 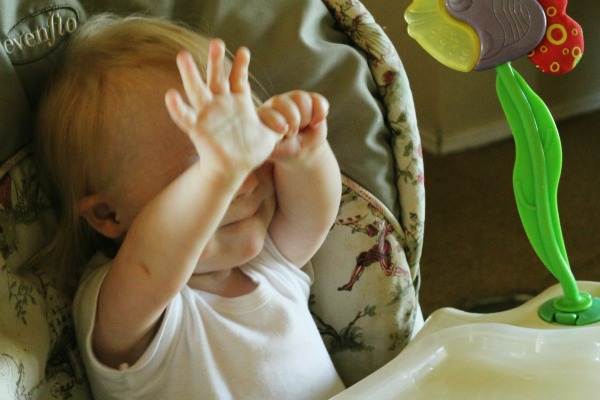 Finally after a dozen lame attempts, I caught you saying "more" on video...you didn't exactly sign correctly, but the word was obvious.. as were the feisty little antics that followed. 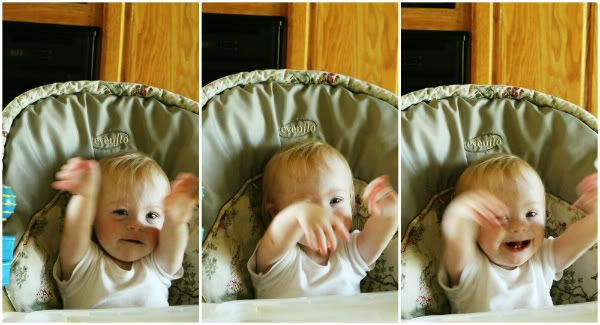 She seriously get's cuter by the day...how do you stand it!?! I love her sweet voice - it's hard to believe our babies are not really babies any more! We just had our IFSP and they said "okay we'll see you in 6 months" and it dawned on me in 6 months Sutter (and Lily) will be 2!!! Crazy how fast time goes by and how much they are learning on a daily basis...I'm loving the toddler stage and it looks like you are too! :)

She is such a cutie pootie!

I took a picture of Ruby last night at supper doing the exact same thing with her foot up on the tray:) Exactly right, so adorable and disgusting all at the same time!

:) This made me smile....a whole bunch!! She's definitely grown up quite a bit just since I've been following (March). Liddy does the same thing. She'll smile and smile and smile until the camera is out. Then she won't smile at all. AND she'll chit chat until she hears the little recording beep on my phone, then she shuts right up and stares at the camera like a zombie. lol Silly kids! Love to you and Lils!

Sweet! You know they never perform when we ask them too. LOL

What a big girl-saying and signing more! Love the videos. It is great to see Lily in motion and to hear her voice.

simply BEAUTIFUL!!!!
not to mention smart, she was playing you like a fiddle, my dear friend & it was adorable!!!

LOOK at that pincer grasp! Hello, she is a pro. And saying and signing more at the same time? Awesomeness. Cuteness everywhere of course, too.

So sweet! Love the videos!