Style Down Syndrome: Bring it. 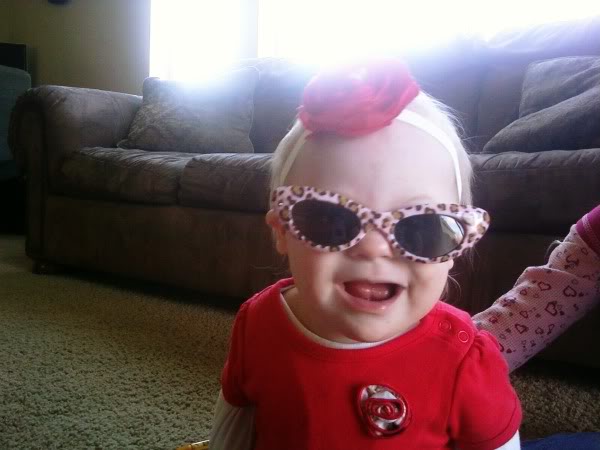 
Last week Dr. Brian Skotko, a Physician at Children’s Hospital Boston’s Down Syndrome Program wrote the following response to an article written by John B. Thompson at GQ Magazine... 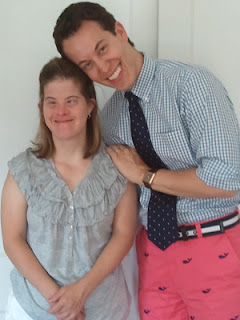 On July 15, John B. Thompson of GQ magazine slammed Bostonians as the worst dressed in the nation. Evidently, our beloved Beantown is actually a “bad-taste storm sewer” where all the worst fashion ideas come to “stagnate and putrefy.” He further decries, “Boston suffers from a kind of Style Down Syndrome , where a little extra ends up ruining everything.”

Go ahead, GQ, and mock my blue whale-emblemed Nantucket-red pants. Laugh if you want at the loud argyles that I prefer to wear with my black suit. I don’t even care if you dismiss the sexy pink polka-dotted tie that I like to wear with my blue-checkered shirt in clinic. But, whatever you do, do not mess with my sister.

My sister, Kristin, has Down syndrome, and let me explain what “Style Down Syndrome” really is. “Style Down Syndrome” is smiling when everyone else prefers to frown. It’s spending three summers, in sheer determination, learning to ride a bike because you want the freedom to be like everyone else. It’s singing tunes from Grease at the top of your lungs with your friends. It’s celebrating a third-place victory at a swim meet with as much gusto as the gold medalist.

Style Down Syndrome is strong-willed, persevering, and forgiving—because it has to be.

All of this comes at a time when people with Down syndrome are achieving previously unimagined successes. They are graduating, working, living and loving within our communities. So, why do people underestimate their abilities? It must be because they do not know someone with Down syndrome. Because, if they did, they would come to appreciate the life lessons that accompany their extra chromosome.

For several days my little site meter reflected the same, as the hits on Lily's blog doubled
shortly after blogging about both the GQ article and Dr. Skotko's blog post. Apparently I wasn't the only one dismayed by the insensitive language used in GQ's article, or the only one ignited by Dr. Skotko's eloquent and impassioned response.

The following quote is taken from Thriving:

“I have been impressed–although not surprised–by the speed in which the Down syndrome community has responded to this hurtful language from GQ magazine,” says Skotko.  "Whether by e-mail, Facebook, Twitter, or blog, Americans across the country are shouting loud and clear that people with Down syndrome deserve our respect and admiration.”

We're a tight-knit community. Whether it's rallying around orphans overseas who share our loved ones' extra chromosome or joining together to make a stand against those who would call our kids a burden to society- we've got our children's backs.


I asked Lily's readers and my friends in the Down Syndrome group on Babycenter.com to contribute photos for a response to GQ's article. I am so thankful that so many of my friends were willing to sacrifice their style reputation on the web to make a statement about their kids :)

I love compiling these types of montages or posts, and even though this one was meant to be on the lighter side, I still get choked up watching it. Well, who wouldn't?! Our kids are amazing, and that extra chromosome evidently brings extra emotion and devotion.

Style Down syndrome. Bring it.

Make an on-line slide show at www.OneTrueMedia.com
*if you cannot view the player refresh the page. Also, pause Lily's playlist at the bottom of the page to hear the slideshow's music.
Posted by Patti at 11:59 PM

Patti, that was wonderful! LOVED it!!!

Thank you, Patti, what a nice collection of beautiful faces! Hugs and kisses to other parents and their children. We all went through the same unknown, and just look at where we are now - pure happiness!

LOVE IT!!!! I would have sent a picture too..but I didn't bring crazy clothes lol I absolutely adore seeing all of those beautiful faces. It makes my entire day. :)

perfection! I cried all through it but it was happy tears. DS is a blessing and I am so happy to celebrate it with you!! Thanks Patti!

patti great job, it is perfect!I hope you don't mind me sharing on my blog.

thank you friend for putting this together

Thank you! This gave me chills! Posting on Facebook and my blog!

Reposting here, too! Thank you!

great job on the montage! Glad we could be a part of it!

Loved, loved, loved all these pictures! What a great video ~ I think you found a new part-time job.

GREAT VIDEO Patti! Perfect! Sorry I didn't get a pic to you, my camera went missing for a couple days :(

Beautiful!!! Tears in my eyes. Thank you for all your hard work. I'm gonna link to you for the video:)

Beautiful...that brought me to tears. I wish I would have taken a moment to figure out how to send a picture! :)

Just beautiful, Patti! I'm sorry I wasn't on the ball to be able to add Josh into the mix. :( Lovely job, as always. Look at those cute kids!! Who needs style when you're that cute? ;)

Beautiful! Those who does see DS as a blessing, must live a pretty boring life! What beautiful faces, I loved it! Way to go- and thank you so much!!!

Squealing with delight and blubbering with emotion all at once! Should've known I would need a box of tissues... darn. That was beautiful. Just perfect. Recognized a LOT of cute faces in there! Didn't make it into this one; maybe the next time around :) You did a fabulous job... and LOVE the song :)))

Absolutely beautiful Patti ... the photos, the song, our children. Stunning. :)

thank you for the beautiful response to such a hurtful few words.

Love it - I got all weepy seeing so many beautiful kids!

Patti, we LOVED this!!! Beautiful, just beautiful!! Perfect song too!!! As always we were proud to be a part of it :) Thank you!

Thanks for the chance to be part of this!! Nevin will get a kick out of seeing his picture in it, with his cousins!.

Patti, this is the first chance I've had to comment about this post. This is special to me because I remember telling you, when we were talking about sweet Albina and any health concerns that she may or may not have that the Down Syndrome wasn't even an issue to me...bring it.
I cannot believe that guy said that in that article but I have a feeling my ears are only just beginning to hear things that may have just slid right past them before.
And Lily is totally rocking her sweet leopard shades...

awesome job! As usual! LOVE it!

Just had to revisit and now my cheeks are hurting cause I was smiling so much at those precious gifts from God. Would love to hug and kiss each and every one of them.