A Day To Save Olga

So many of you already know this beautiful little face.... 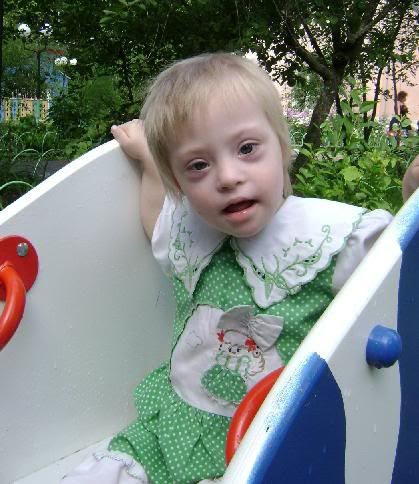 Olga turned five last month. She has spent the last five years in an orphanage in Eastern Europe, without the love of a mommy and daddy- simply because she arrived in life exactly as God designed her. One chromosome too many, and her fate was sealed from birth. 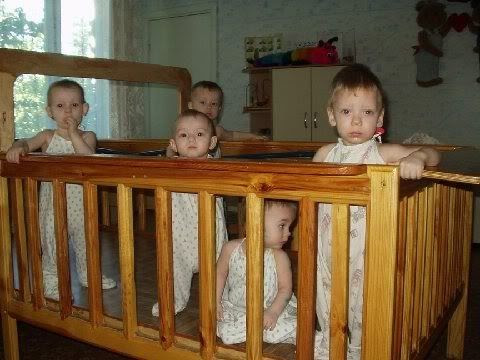 Sealed, because in Eastern Europe, babies who are born with Down syndrome are deemed unacceptable at birth. They are discarded as cast-offs of society, and when they turn five they leave the only home they've ever known...

And I wish I could say that for most of these children, leaving that home means going to a place of safety, a place of happiness, a place where they would finally know the love of a family...know what it means to be cuddled or sung to or read to, tucked in at night, prayed for, loved.

Instead, they are taken to a place that most people wouldn't leave their family pet. 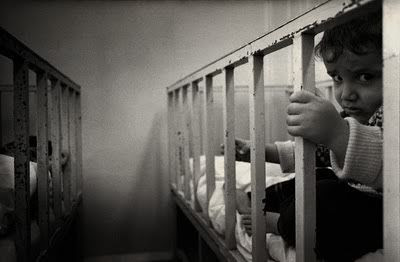 I read a post last December that stayed with me to this day. It was called from baby dolls to bedstraps.

The blog author wrote about Elizabeth, an orphan on Reece's Rainbow who had been transferred to a mental institution, waiting for a family to step forward for her. Her words still haunt me.

I wonder where she thought she was going as they led her out of the orphanage that day. Did she think that maybe it was finally her turn? That they were taking her to her forever Mommy and Daddy?

And when they instead took her inside that dreadful place, when they shaved her head and tied her to a too-small metal crib

when they turned their backs and

when they left her confused, terrified,

what was going through her young mind?

Did she wonder if she was being punished?

How long did she hold out hope that this was only temporary?

That any minute, they would come and take her back to the baby house

to her baby dolls and teddy bear,

to her best friend, Angelina?


Did she long to free her arms from the restraints

to cover her head with her hands to drown out

That could be my Lily….


It could be your child.

And what if it were?

What if you woke up one morning

and by some hellish, twilight-zone twist of fate

your child wasn’t still tucked into that warm bed down the hall,

what if your child was trapped

across the dark sea

in that nightmare that is

Rescue those being led away to death; hold back those staggering toward slaughter. Proverbs 24:11

Elizabeth is being rescued today, thanks to the efforts of that blogging mama, and others like her.

Olga is being rescued today, thanks to so many of you...you gave so much and created such a large grant that a family was able to step forward and start the process of adoption.

The Abells have done so much already, towards rescuing Olga. I can't even imagine all the paperwork and prayer and emotion and finances that goes into an international adoption. They have done numerous fundraisers, and will continue to do so until they can bring Olga home.

Through the help of so many, a grant of over $13,000 has been raised for Olga's adoption. That grant is set aside for the final travel costs and fees that it will take to bring Olga home. It will take every penny of that and then some.

Right now the Abells are in need of raising the $7,000 that is needed to submit their dossier for Olga. Without that dossier we don't even know if Olga has been transferred yet. Here in America you just pick up the phone and ask these questions. But here in America we don't tie five year old girls to cribs to keep them from climbing out.

The Abells need to submit that dossier as soon as possible- at the very least to find out if she has been transferred already- because I know an army of prayer warriors who is going to want to know that piece of information as well. And at the very most, it could be able to hold Olga at the baby house until the Abells can rescue her. I wish I could say with certainty that she won't be transferred- truthfully we just don't know that.

Olga has been so heavy on my heart for months- friends, I want you to know that I DO trust that God has a plan here.

I prayed like crazy for a way to help the Abells. I truly believe that there is a network of people who love Olga here in blogland...a net that is woven by God and is stretching out across this blessed country we live in, and even beyond to generous hearts in other nations. I really cannot express enough how thankful I am to be a small part of what God has already done for Olga, Peter and Kareen. But I don't think our job is done.

I don't want her to spend one more forsaken day in that place than she has to.

We're not doing a giveaway here today. I don't even think we need to do one- I know so many just have a heart to help and to give, and prizes were never the real reason we all gave anyway.

So I'm just asking- for one day- for you to do whatever you could to help Olga. Whether that's $10 or $20 or even a hundred...if you are able to help raise this money for the dossier, please do so HERE... This is the Abell's chip-in.

We're calling this A Day to Save Olga, because there are about 17 of us blogging mamas and one blogging grandpa who have set aside this day to blog, post on Facebook, pray, give and spread the word to SAVE OLGA.

Will you help us?

I know you will:)

Those pictures totally break my heart. I'm praying so hard for the Abell's, Olga, Elizabeth, and everyone else. I love them, and I want to do whatever I can to help them. I'm donating and posting on my blog too...

Let's get her home!

I am going to blog about Olga in addition to my ABC's today, Patti. How can I not? My heart is already so connected to Alexander and knowing I have to go the institution to save him just breaks my heart. I understand the money situation full well--the money we had for our upfront costs is now gone. We have to give it back to my sister so she can move out. That was $4800 and it is a big hit for us--yet we will not stop, we will keep going. I know Olga's family will too.

The blitz is on! Blogged, Facebooked, and emailed! Waiting to see the results...

These stories weigh heavy on my heart. I have a lot of questions wondering if Lily's Mommie could email me. @ jlc5012001@hotmail.com

I can't wait to see what today brings for Olga and her family!!

So excited about this! :D

I am posting on FB, getting in touch with contacts, kids are passing out flyers, donating, etc. I cannot stand to think of Olga in that institution for ONE minute!! Patti- thank you SO much for continuing to be a voice for those that cannot speak for themselves. They depend on us oceans away to not give up on them. You have opened your life to these babies in spite of everything you have going on in your life. You are a real picture of what selfless truly means. Mommy to 10 kids, a wife of a pastor, homeschooling, and the list does not end. But you have died to your life and are living to Him- our Lord. May you be surrounded by His unfailing love. Much love to you my friend, Cara

sharing on my blog as well

Shared on my blog and even wrote to every bloggy mom I read to write about it.

I hope you don't mind that I just copied your post to mine, it was just so good and I knew I couldn't top it! Thank you for including me in this awesome thing! Prayers going to Olga and all the rest!

Not at all- thank you for posting and praying!

I am blown away by all the people coming together for this precious little girl! God is SO GOOD!!!

Patti, thanks for visiting! We've been so busy. I want to post this on my blog - k? Thanks!

Patti, I tried to just copy this to my blog but it wouldn't let me, and I'm not all that tech savvy! I will get it there tho, and did post to facebook. Plus I'm mailing my check to them as I type!! Great post, as always!!

and your lily cheerleader is such a sweatheart. thanks for all your words and pictures and your big heart.

Add me to your list of bloggers who wrote a plea for Olga. I felt guilty about missing Monday, but luckily, I often spend money when I feel guilty, so I went to RR and did just that.

The pictures of the dozens of children in baby beds just broke my heart. :(