A Scary Story just for Halloween!!

Yesterday I wrote about your birth story part 3...and today I'm going to conclude it. Sort of.

I left off with our decision to leave your sister Mackenzie with you in the NICU through the night. The nurses had told us that I wouldn't be able to hold you if I was falling asleep, and Daddy convinced me that I really needed to get a good night's sleep because we had a long day- maybe few days ahead of us. At this point the doctors were still just giving you liquids through your IV, and the nurses were attempting to feed you my milk in a bottle- though you weren't doing a very good job of taking it. 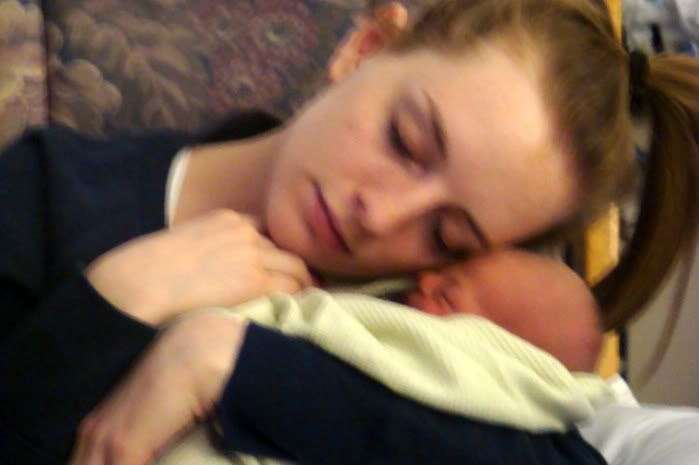 We kissed you goodbye and told Mackenzie to call us if she needed us for any reason...the Ronald McDonald house where we were staying was right next to the hospital.

At this point my legs were really not functioning at all. It was so embarrassing, but it was like walking on sticks of jello. They literally would not hold me up. Daddy went to find me a wheelchair, and I started crying in the hallway...one of the nurses asked what was wrong and I told her I was scared- why weren't my legs working? Normally I don't have medication during my labors, but I had had an epidural with your delivery...I was worried that something had happened during that epidural that was now effecting my legs.

The nurse was very sympathetic and kindly explained that a)I was exhausted b)I had just given birth the day before c) I had been sitting all day and not drinking enough water, so my legs were retaining water and swelling and d) my pain medicine had started to kick in, which can make it difficult to walk normally.

By this time Daddy was back- thankfully, because I could not even keep my eyes open. He helped me into the wheelchair and piled our bags on top of me...and away we went.

Lily, it's going to sound dramatic as I tell you what that little journey felt like. And writing this really makes me laugh...because it was only half an hour!! But at the time it felt like eternity. Daddy was still navigating the hospital- which was really a campus- and got a little lost trying to find the exit. I had my eyes closed the whole time, and I kept dosing off and waking up only to find us in a different hallway. Poor Daddy was exhausted as well- he had been up since 6 the previous morning!

When we finally reached the entrance of the hospital, Daddy realized we had to leave the wheelchair behind. The Ronald McDonald House is a ten minute walk around the corner of the hospital...and by this time it was 11 at night, in January in Oregon..raining...cold...and my legs wouldn't work.

So your genius Daddy went looking for a cab driver. What he found was a middle eastern security guard who was making his rounds in a...cab. Not for the purpose of transporting semi-comatose, post-baby mommies from one building to another...but Daddy can be very persuasive when he is desperate.

Daddy wheeled me out to the cab and helped me out of the wheelchair- I could not stand, so he picked me up and put me into the cab, and went back to the entry way of the hospital for our luggage. By this time I was shaking all over from the cold and what I know now was panic...and in my delirious state...don't laugh, Lily, and I know this was terribly politically incorrect of me but...I thought the cab driver was a terrorist who was going to kidnap me.

Have you realized your mommy can be subject to paranoia at times? I assure you it is only under extreme duress. This usually doesn't happen to me on an average day.

But at that moment- in the middle of the cold rainy night, in my drug-induced delirium...Osama Bin Laden was my cab driver. And I was stuck in the cab with him, cuz my legs wouldn't move. And it took FOREVER for Daddy to get our luggage back to the car. At least it seemed like it!

Osama was stoic and silent as he drove us around the corner to our little home away from home. He screeched to an abrupt stop- waited half a second while Daddy got the luggage out and helped me out- and peeled off into the night. Maybe he was worried we would ask for a ride back to Corvallis as well? I dunno, but I was glad he was gone.

Until we realized.... there was a loooong sidewalk leading to the door of the Ronald McDonald house- the name of which at this point sounded to me like some sick asylum- and Mommy couldn't walk. And our luggage was sitting next to us in the pouring rain.

And right now I have to say that your Daddy is MY HERO, because that man was more exhausted than I was, I'm sure. But he heroically stacked our luggage and my purse and bags filled with breast pump supplies on top of each other, grabbed the stack with one hand, put his other arm under my arm and around my shoulder and DRAGGED us all the way down the walkway and up the stairs into that house. We were a sorry sight I'm sure- my legs wouldn't even attempt to move forward, try as I might, and Daddy and I actually started laughing...sort of maniacally laughing...saying things like "some day we're really gonna look back at this and laugh."

And I'm so glad I am now able to look back and really laugh at that moment.

And now we have to go to church, so I will have to have a part 3 to my part 3...and I know this was a rather funny little letter. But isn't it nice to know that little part of our night served a purpose in the big scheme of things? Cuz my story really needed a little comic relief in the middle, and our terrorist-cab-driver-jello-legged-mama incident certainly fit the bill.

Love always,
Mama oxox
Posted by Patti at 8:01 AM

Sounds so perfectly Kopp/Rice sane to me! ;>)

Haha I'm glad you can find humor in all of this now! It is quite funny about the cab driver :) Can't wait to read the next part of the story

I'm glad you can laugh at that now, but I'm crying!!

Except the part about the driver being a terrorist, that made me laugh.

Hey Patti:) I got Molly's mouse costume on ETSY (Needle Nerd Babies). I saw some for cheaper after I submitted my order to her, though. I was even thinking of doing one for Xmas...Lily would love one I'm sure in Oregon?

What did your family do? I need to start following your other blog too and see!! Your birth story is gripping! I had a c-section and think one of the things about that is that I'm not as "clear" about the day of. I might be inspired to write them one day, though. Happy November to you and your family.

Thanks for stopping by my blog. I've had a few questions about Wesley's diagnosis, so I posted an explanation yesterday.

I have enjoyed reading Lily's birth story. I'm glad you can laugh now as you look back on it. :-)

Patti! I've taken a few days off from work and that has allowed me to catch up on Lily. I love how your write from the heart! And of course, the pictures are incredible! I love your family! thanks for sharing. Can't wait to read the rest of the birth story, but I am still chuckling over Lily's love of lasagna!

Oh goodness, I missed this when I was going through your birth story posts. This was some much-needed comic relief. I hope you didn't say nything embarrassing to Osama in your half-panicked, half-delirious state! lol