The adventures of Flannery

I'm starting off this post with some pictures from December, because I told myself I was going to get the blog caught up to now and then Madison would arrive.
And although I don't believe in giving too much power to outside influences having the ability to affect the time of labor and delivery (I've had babies come when I was COMPLETELY unprepared and had nothing scratched off my to-do list, including buying diapers and a car seat !) ... I still want to scratch this one off.
The same held true for my pregnancy journal the other night ... I have this long standing tradition of declaring that our unborn baby won't arrive until Sam has written a letter to him/her in my journal . It has rarely triggered spontaneous labor when the said letter is documented for future generations to read ... but it does make me feel that we are one step closer to D day. And also makes my husband feel that he is part of that process :)
So anyway .. Here are the December pictures, and if Madison delays her arrival for a few weeks, there are plenty more to come .. 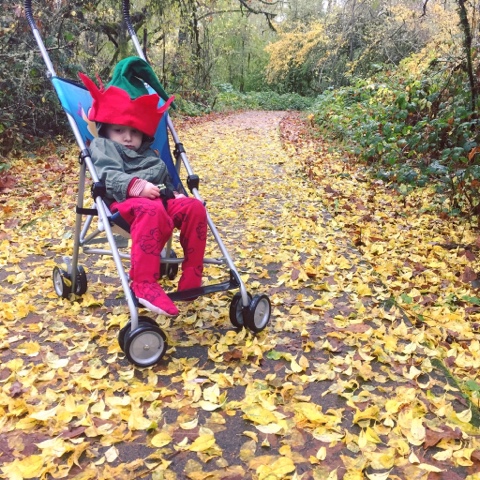 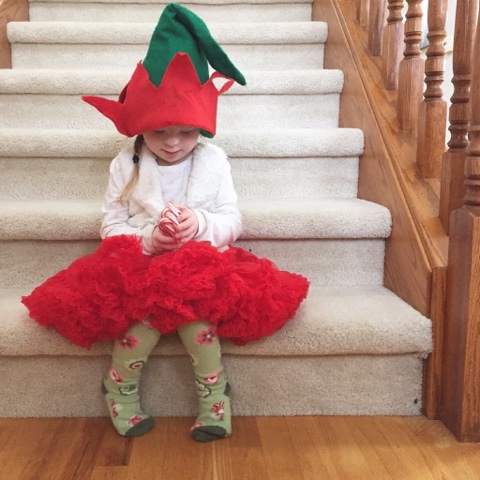 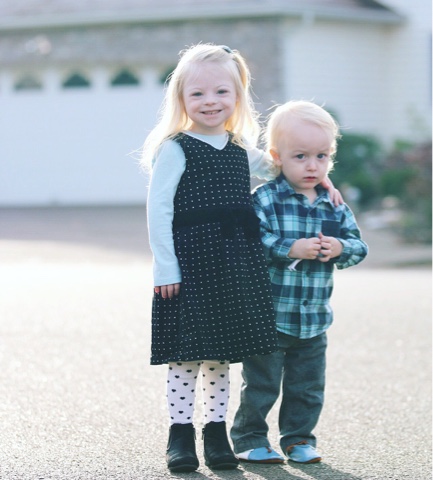 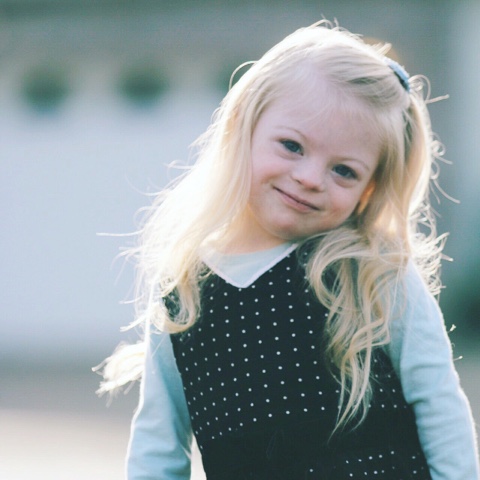 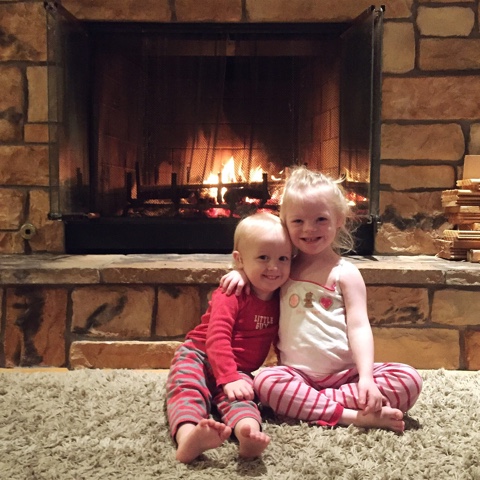 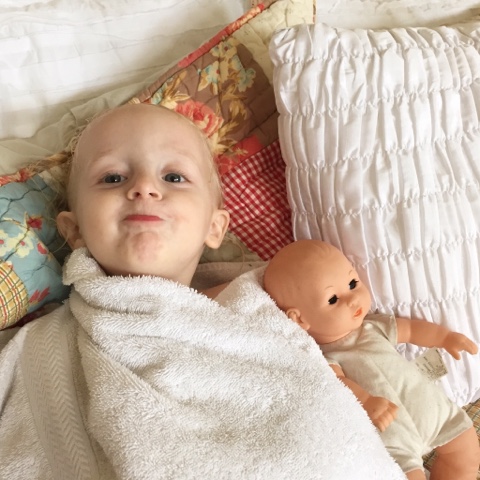 I think I blogged briefly about our new tradition this Christmas (new to us, I mean.) I never wanted to splurge on the Elf on the Shelf package prior to this December because I'm cheap like that. But when I spotted a cute imitation elf for a just few bucks at a craft store, I caved.
And I'm so glad I did because my kids - especially Hayden !!!- had SOOO much fun every morning waking up to see what Flannery had been up to during the night. 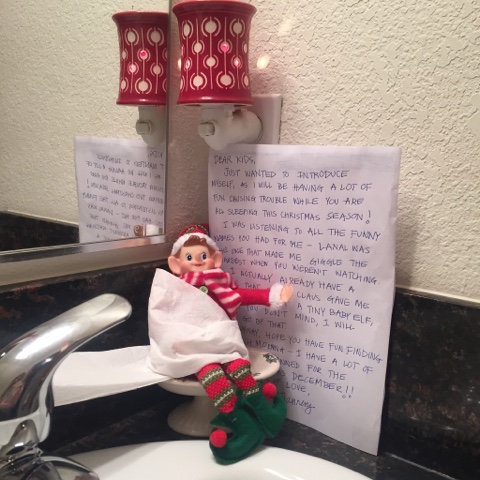 His first night here, he toilet papered the bathroom ... and left a note explaining that he would be back every night until Christmas to create mischief as well .
His second night he created a disgusting masterpiece of leftover spaghetti, chocolate chips, marshmallow maties and pancake syrup ... Hayden talked for days about how silly Flannery was to eat marshmallows on his spaghetti :) 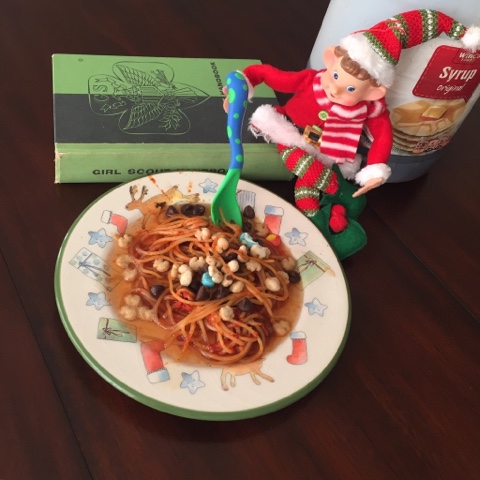 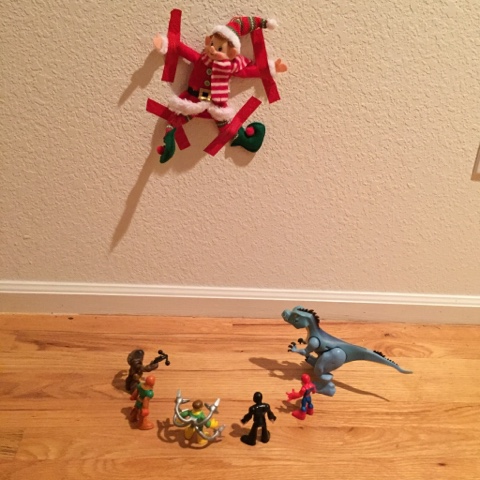 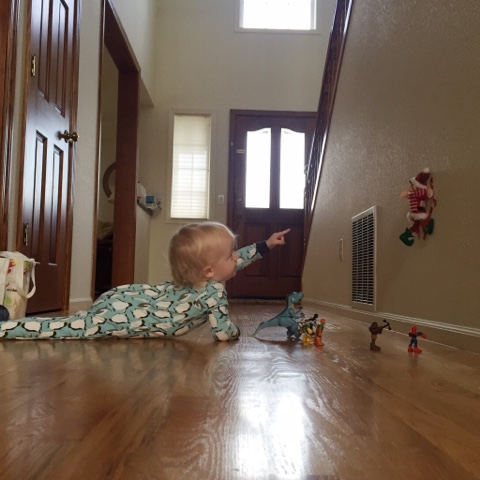 And the next night Flannery took revenge ... 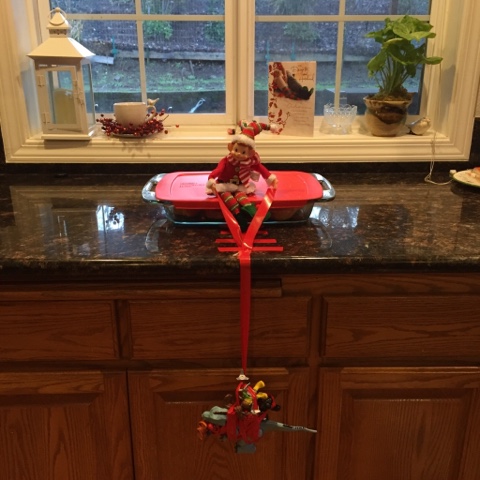 One morning we all woke up to see Flannery taking a leisurely bath in a sea of marshmallow bubbles, munching on an Oreo. (He really enjoys marshmallows, and found many ways to insert them into his nightly naughtiness !) 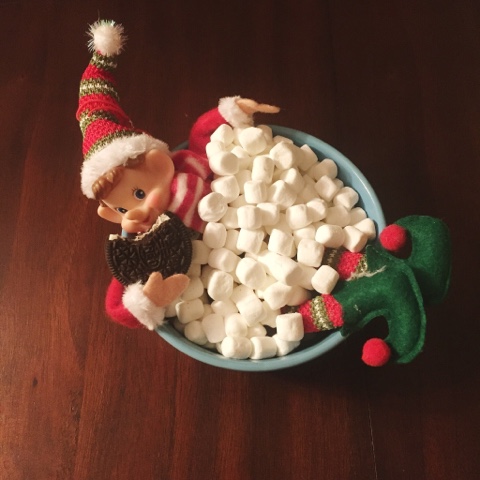 Another morning we discovered him flying in a toy plane on top of the living room blinds ... 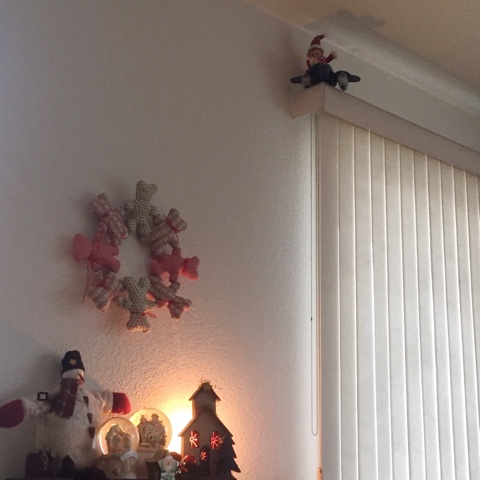 He wrapped the toilet in wrapping paper .. 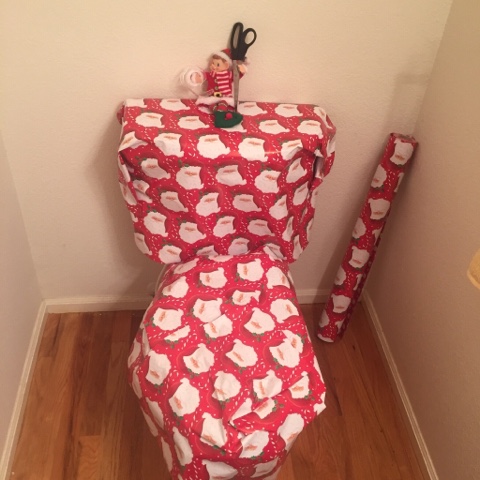 ... drew mustaches and glasses and horns on our family Christmas photo ... 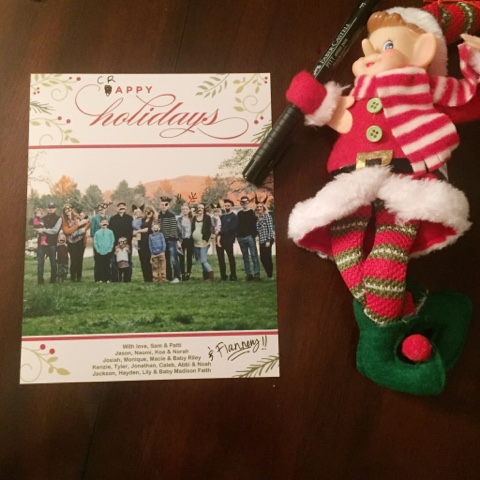 ... left a message written in toothpaste on the dining room mirror ... 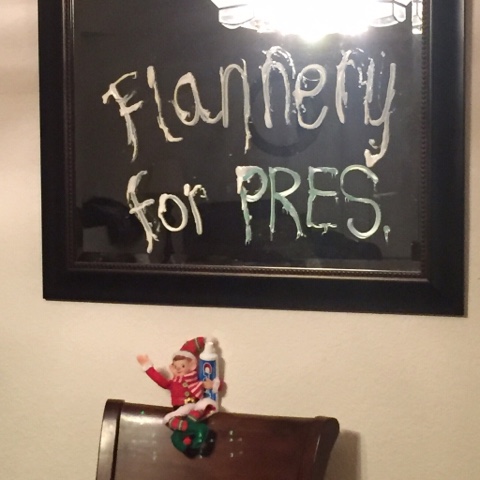 ... had a marshmallow snowball battle with a Rescue Hero (Flannery lost) .... 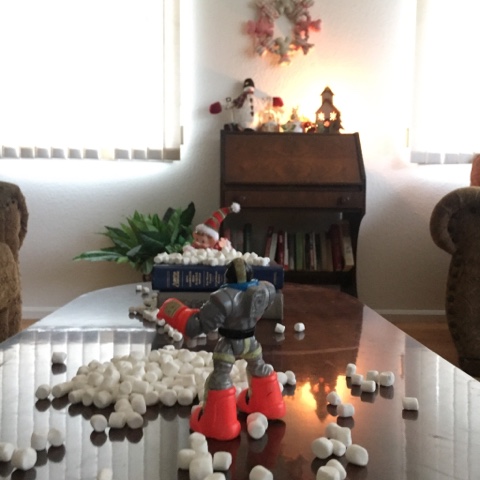 ... And covered him in leftover frosting and candy from our gingerbread house decorating party as pay back ... 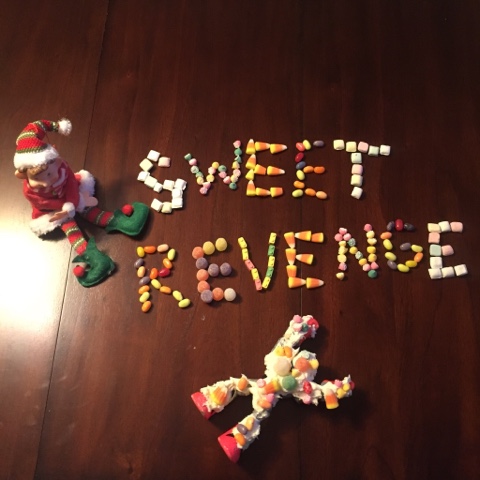 For the most part Flannery was as naughty as could be - the depth of his depravity being an all night drinking binge. (White cooking wine was the only "adult beverage" he could find in the Rice Ranch pantry.) 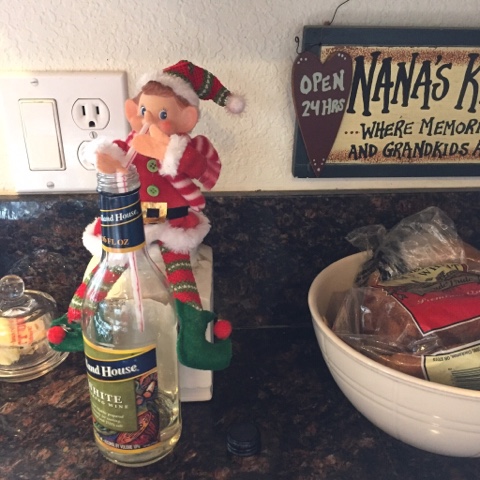 ... but he did take one night off from his wicked ways, delivering a gift to Baby Jesus - with a sincere look of repentance on his tiny plastic face. 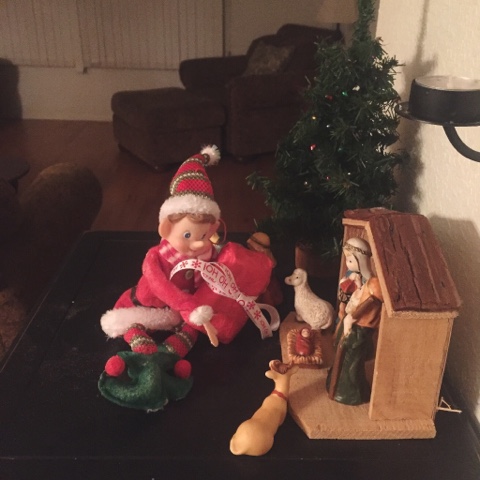 He finished off the season with a ride on a stuffed Reindeer across our kitchen counter, leaving a trail of Hershey kiss poop cookies behind him ... but I spared you all the photo that memorialized that moment . You're welcome .
Our sweet little Elf left a handwritten farewell note for us all on Christmas morning, promising to be back next year with a new set of tricks up his sleeve .
Hayden asked for days where Flannery went, and even now he talks about all the crazy things he did while he was here.
We miss the little rascal, but we know he is resting happily at The North Pole, plotting and planning for next December- in the mean time we have our own little mischief-maker to take his place .. 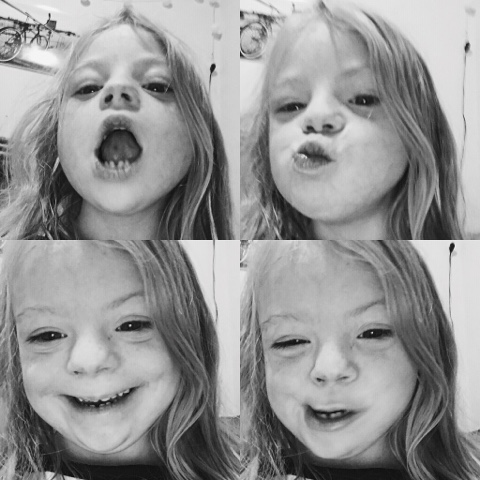 :)
Be back soon with more pictures of our favorite month of the year !
Posted by Patti at 9:12 PM

Y'all are hilarious ! What a treat Flannery is for your kids!

I wish you were my Mama! What fun!!! You should really right a book about Elf adventures to share with the Elf of the Shelf people! Love this!

Flannery was very creative, putting Claire to a challenge to keep up with his antics. We all had such fun seeing the pictures each day. We came to the conclusion boys are naughtier than girls. hee hee

I am seriously impressed with your-- I mean Flannery's creativity. Wrapping the toilet? Too funny! I'm sure your kids will hang on to those special memories for years!

I think Flannery is even cuter than your run-of-the-mill Elf on a Shelf!

How do you find the brain time to be so creative, mama?! You never cease to amaze me!